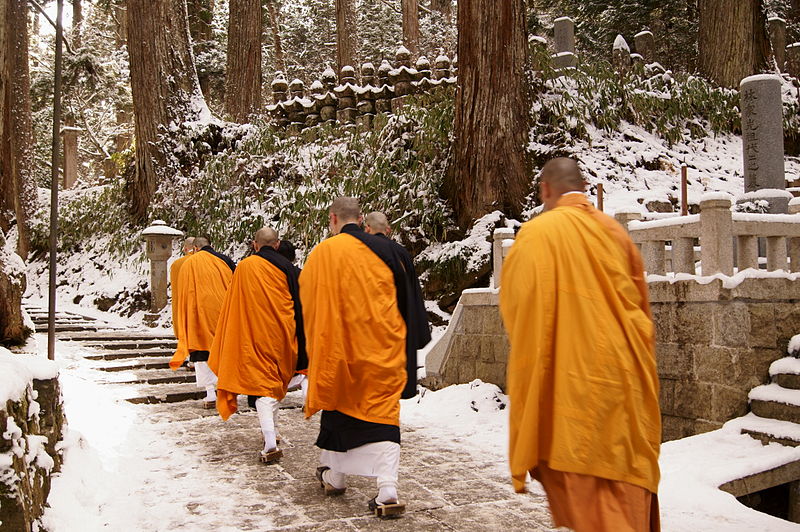 Mt. Koya (Koya-san, in Japanese) is located in the Wakayama prefecture in the Kansai region – south of Osaka. This is the very center of Shingon Buddhism – one of the leading Buddhist sects in Japan. Founder and a leader of this teaching was the great Kobo Daishi (774-835), who is believed to have seen the Great Buddha, after coming out of his meditation.

His mausoleum is an absolute must for all visitors – foreign and locals, as this is also considered one of the most sacred places in all of Japan. It is said that Kobo Daishi, the founder of the Shingon Buddhism, is not dead but in eternal meditation while awaiting Miroku Nyorai – the Buddha of the Future. During his time in meditation, people say that Kobo Daishi helps those who ask for salvation and relief.

In relation to this, the Shingon school teaches of thirteen Buddhas who assist people during their life on earth and continue helping them after death to find the path to enlightenment.

What to see in Mount Koya

Do not miss out on learning more about the Pilgrimage Trails of Mount Koya that take close to two months to complete on foot. People say that after making only one journey of this kind, it will change your views on life completely.

What is more, this is the perfect place for a night in a temple lodging. One of the best ways to experience the traditional, spiritual and humble life of the Buddhist monks for a night.

Traveling to the area will take you through its dense forests and traditional architecture, consisting of over a hundred Buddhist temples. The temples are spread around two distinctive areas: temples and pagodas (3 or 5-story structure, with Indian origins) to the west of Mount Koya. Okunoin, the largest and most mysterious cemetery in all of Japan is in the east area. The Japanese believe there are no dead in Okunoin – just awaiting spirits.

Furthermore, tourists and pilgrims can also stay at a temple lodging, accustomed to foreign guests, which allow experiencing the simple and long-established lifestyle of the Buddhist monks. You can do so through Japanese Guest Houses and Koyasan Shukubo Association websites.

How to get to Mount Koya with the JR Pass

It is possible to reach Mount Koya using your Japan Rail Pass. However, it will be slightly slower in comparison with the journey, described below.

Take the JR Kuroshio train from Shin-Osaka to reach Wakayama station. The train ride will take close to an hour.

Note: Shin-Osaka is not the central station in Osaka, but the hub for shinkansen bullet trains. However, if you have come from Tokyo, this would have been your final station.

Following is a detailed guide on how to reach Mount Koya from Osaka.

An alternative would be to make a short bus ride for just 10 minutes, costing you 290 yen to Senjuinbashi – this is city center where all the tourist information and offices are located.

You can also save money by purchasing the Koyasan World Heritage Ticket, a combined ticket that includes train, cable car and buses.

Getting around the Koyasan area

Once there you can move around easily. However, three local bus lines commute to some of the main temples and tourist attractions. These buses can be very helpful in case the weather doesn’t allow long walks in the forest.

For further information about routes and timetables, please visit Nankai Koyasan station guide and our map of the Kansai area trains.