JRailPass.com » Japan Travel Blog » Destinations » Nara Park: How to get there and what to see 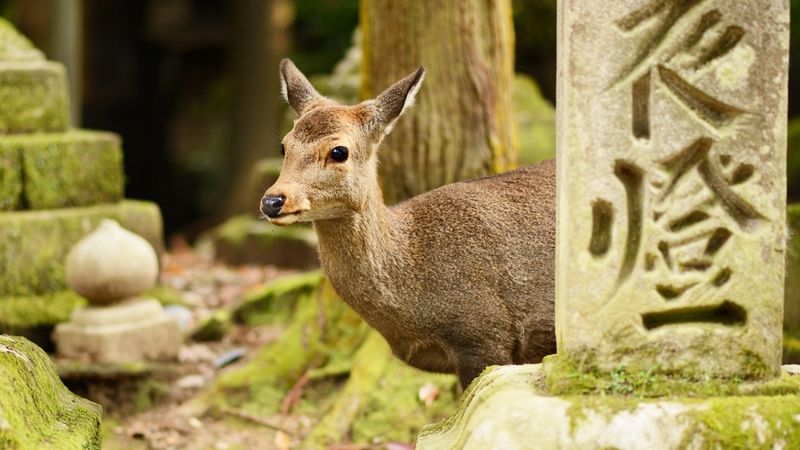 The location of many of the most appealing attractions in Nara, including the National Museum, Kofukuji Temple, Kasuga Taisha Shrine, and Todaiji Temple, the city’s deer park was founded in 1880 and is one of the oldest in Japan.

Visitors to the park can also buy special crackers on-site to feed some of the hundreds of tame animals that roam the grounds, and enjoy the spectacular cherry blossom in the spring. Nara can be easily reached by train from either Osaka or Kyoto.

How to get to Nara Park

The Nara Deer Park can be reached easily from most major cities using your Japan Rail Pass.

From Kyoto, take the JR Nara Line from Kyoto Station to JR Nara Station. Miyakoji rapid trains depart every 30 minutes, and the trip takes about 45 minutes one-way. It is covered by the JR Pass. Local trains are also available, but take an hour and fifteen minutes one-way.

From Tokyo, take the Tokaido Shinkansen Line to Kyoto Station. From there, take the JR Nara Line to JR Nara Station, as described above. The trip is covered by the JR Pass.

Also read: Nara travel guide: How to get to Nara and main attractions

Nara Park is a twenty-minute walk from Nara Station. Buses are also available, and multiple bus stops are located around the park.

The Nara Deer Park is open 24 hours a day. Admission is free, but you will most likely wish to purchase deer crackers during your visit. A pack of ten crackers costs 150 yen.

Other temples, shrines, and museums in the park have similar opening hours and entrance fees.

Things to do at Nara Park and the surrounding area

Whether your interest is in nature, history, or dining, there is plenty to do in and around the Nara Deer Park. Hang out with the local wildlife, visit a museum, temple, or shrine, and refresh yourself at a local tea house.

In the Shinto religion, deer are esteemed as the messengers of the gods. The 1,200 deer that call Nara home have therefore become a symbol of the city and are considered a “natural treasure.”

Deer crackers, special rice crackers called shika-senbei, are sold at various locations around the park for visitors who would like to feed the deer. Some of the animals have learned to imitate a bow to ask to be fed. Some also know that when you wave “goodbye,” it is time for them to depart. Others have learned to wait at traffic crossing signals. Petting the deer is also possible.

While the deer are surprisingly tame, caution is in order, as hungry deer can become aggressive or competitive when desiring to be fed. Pay attention to safety signs posted around the park in both Japanese and English.

What kind of deer inhabit Nara? They are sika deer, called shika in Japanese. The sika is unique in that it does not lose its spots as it reaches adulthood. Male sika deer may sport large antlers.

Todaiji Temple is famous for being the largest wooden building in the world. It houses a large statue of Buddha, measuring 15 meters (50 feet) tall. It is known as the Great Buddha or Daibutsu.

Other attractions on the temple grounds include the Nandaimon Gate and the pillar with a hole in the middle at the back of the temple. Children who can squeeze through the hole are thought to be future recipients of enlightenment.

The Nara Deer Park is a worthy day trip from Kyoto and Osaka. Grab your JR Pass and start planning your next adventure today.