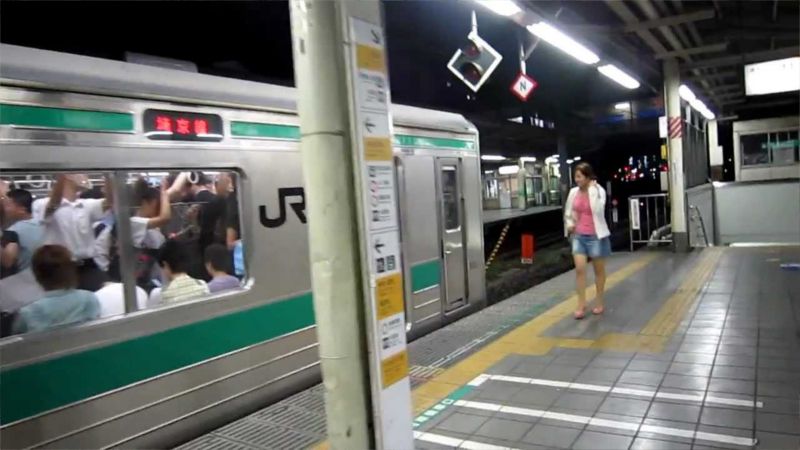 The JR Saikyo Line, or Saikyo-sen, connects Osaki Station in Tokyo and Omiya Station in Saitama Prefecture. Opened in 1885 and is operated by the East Japan Railway Company, or JR East. Over a million passengers utilize the JR Saikyo Line each day.

Did you know? The name “Saikyo” is an abbreviation of the areas that the line connects: Saitama and Tokyo. It was formerly known as the Nippon Railway Shinagawa Line, the Akabane Line, and the New Commuter Line.

As an international traveler, you can purchase a Japan Rail Pass. The JR Pass will allow you to travel quickly, easily, and affordably on the JR Saikyo Line as well as on all JR railways.

There are a total of 19 train stations along the JR Saikyo Line. These include:

The JR Saikyo Line is classified as a commuter rail service, meaning a passenger train service that connects suburbs and other towns to the major metropolitan area of Tokyo. As such, its trains run slower than some other services, with maximum operating speeds between 90 kilometers (56 miles) and 100 kilometers (62 miles) per hour.

Some trains continue past the terminal stations of the JR Saikyo Line. For example, some transfer to the Kawagoe Line at Omiya Station and continue as far as Kawagoe Station. Southbound trains may travel past Osaki Station using the Rinkai Line, which is operated by the Tokyo Waterfront Area Rapid Transit, toward Shin-Kiba Station. Others may continue to Ebina Station using the Sotetsu Main Line.

The JR East Tokyo General Rolling Stock Centre is located at the link between the Rinkai and Saikyo Lines. There, train cars for the Yamanote Line are stored.

The JR Saikyo Line spans nearly 37 kilometers or 23 miles, stretching northward from Tokyo. It runs parallel to the Yamanote Line from Ikebukuro to Osaki. This portion of the Saikyo Line is also called the Yamanote Freight Line.

The area between Omiya Station and Akabane Station is called the Tohoku Honsen Secondary Line, and is used as an alternate route to the Tohoku Main Line. The portion of the line between Akabane and Ikebukuro is also called the Akabane Line.

Things to do along the JR Saikyo Line

The metropolis of Tokyo is on most Japan travelers’ bucket lists. It offers something for every traveler, and stations along the JR Saikyo Line are in the heart of many interesting neighborhoods.

Shibuya, for example, is a favored youthful destination as a shopping and entertainment district. Shibuya generates many of Japan’s fashion trends and is home to more than a dozen major department stores. Shibuya Station is also famous for the iconic intersection and crosswalk in front of its Hachiko Exit, lit by glittering neon lights and video screens.

Shinjuku Station is the busiest railway station in the world, with more than two million passengers passing through it each day. The station itself is surrounded by shopping malls. To the west of the station is the Shinjuku skyscraper district, home to some of the tallest buildings in Tokyo. Many offer free observation decks. To the station’s northeast is the Kabukicho red-light district.

The city of Saitama is only a half-hour train ride from Tokyo and is a perfect location for a day trip. There, you can visit the Railway Museum to learn more about these wonderful trains you are using. Take a stroll through the Omiya Bonsai Village, a residential neighborhood that, since 1925, has been home to many bonsai nurseries and a bonsai art museum. The Musashi Ichinomiya Hikawa Shinto Shrine is a 20 to 30-minute walk from Omiya Station. Its name means “top shrine,” and it gave the region of Omiya, meaning “great shrine,” its name. Finally, you can take in the natural and architectural beauty of Omiya Park when you visit the Saitama Prefectural Museum of History and Folklore.