JRailPass.com » Japan Travel Blog » Destinations » Tokyo » Shinjuku’s Golden Gai: Best bars and how to get there 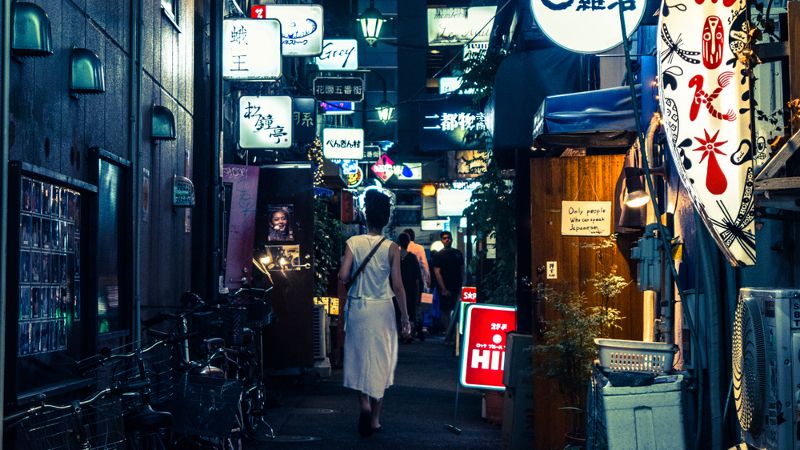 Six alleys in Shinjuku’s Kabukicho red light district are lined with tightly packed independent bars. Glows from within light up the night, but this isn’t the neon city you expect when in Tokyo. This is the Golden Gai, an unfiltered and unpolished doorway into the other side of Tokyo’s nightlife.

What is the Golden Gai? How do you get there? What should you do (or not do) while you are there? We’ve scraped together the savory and seedy details in this Golden Gai travel guide.

What is the Golden Gai?

The Golden Gai housed Tokyo’s black market during the 1950s, and prostitution during the 1960s. It has been described as “a collection of mismatched, tumbledown bars lining alleyways in a darkened corner of Shinjuku”. Unlike much of Tokyo, the Golden Gai does not glitter with neon lights. It hearkens back to a distant time when Japan was still recovering from the ravages of World War II. It offers a rare glimpse of Tokyo’s architectural heritage, most of which was consumed by the 1923 earthquake, the fires of war, or twentieth-century economic development.

The Golden Gai houses over 200 bars, some of which lie upstairs, a floor above their intoxicating companions. Some of the structures are only a few feet wide. You will literally rub shoulders with other customers in many establishments – for this reason, the Golden Gai is considered one of the friendliest places to meet people in all Tokyo.

The Golden Gai is similar in atmosphere to the nearby Omoide Yokocho, which means “Memory Lane”. Colloquially called “Piss Alley”, this small street is lined with tiny yakitori stands and other small restaurants sandwiched alongside one another.

How to get to the Golden Gai

Golden Gai is a few minutes walk from the east exit of Shinjuku Station, located between the Hanazono Shrine and the Shinjuku City Office. If you go by train you can use your Japan Rail Pass to get to Shinjuku Station on any of these JR lines:

Once at Shinjuku station, take the east exit of the station and walk east to Golden Gai.

If you go by subway (not covered by JR Pass), take the E2 exit from Shinjuku-Sanchome station of the Marunouchi, Fukutoshin and Toei-Shinjuku subway lines.

The best bars in Golden Gai

If you feel somewhat intimidated by the vast number of establishments to choose from, try out one of our top picks, below.

Zucca is the Italian word for “pumpkin,” sports Halloween-themed decor.

A Gothic-style bar with gilded mirrors and chandeliers, Albatross is rumored to have once been a brothel. The bar has two floors and a roof terrace. The cover charge is about $5.00 U.S.

Champion is famous for its karaoke, as well as its “one coin” 500 yen drinks.

“Leopard print wallpaper, 80s music, and alcohol” – what more can we say? The actor/screenwriter bar owner welcomes international tourists. The cover charge is less than $5.00 U.S.

Bar Darling offers an escape from the male-dominated establishments, with female bar staff catering to female clientele. Relax with fairy lights, over 100 drink choices, and the occasional local celebrity.

Orange Prince, also commonly known as Bitter Orange, is open until 5 am and offers a variety of wine, beer, and cocktails.

Tourist-friendly, this bar has no cover charge, an English-speaking staff, and all drinks are priced at around $7.00 U.S.

Named in honor of the 1962 science fiction film Chris Marker, this bar is a meeting place for disciples of French cinema and the Nouvelle Vague movement. Frequented by film directors such as Tarantino or Wenders, it is the ideal place for filmmakers and artists.

Most bars in the Golden Gai open about 9 pm. Some open as early as 5:30 pm. Remember the following restrictions while in the alleys of the Golden Gai:

Some bars have cover charges, while others do not. Cover charges will be clearly indicated on the bar’s door. Some also have “sleeping charges” of about $50.00 U.S., if you pass out and forget to return to your accommodations. Most bars accept cash only.

Because the bars are small and have limited seating, some post signs reading “regulars only”, “no tourists”, or “no foreigners”. Be aware of these signs, and respect them. Don’t worry – plenty of the bars are foreigner friendly. If you see a menu in English, you can confidently head on in.