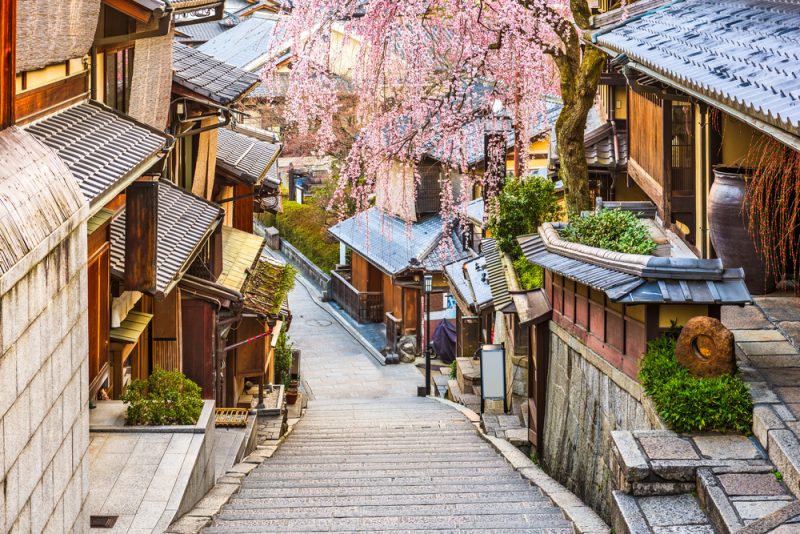 Kyoto is one of the most well-known cities in Japan. It is the capital city of the Kyoto Prefecture of Japan’s Kansai region. For more than one thousand years, Kyoto was the Imperial capital of Japan.

At the city’s heart lies Gion, a center of the traditional arts and famed entertainment district. If you’re searching for a taste of traditional Japan, Gion’s flagstone streets lined with wooden buildings is a good place to start.

Gion’s entertainment district arose as a direct result of its religious sites. Food and lodging were needed by religious pilgrims traveling to visit these sites. Kabuki drama eventually became popular on the west side of the district. Today, it is Kyoto’s most famous geisha district. Contrary to popular belief, geisha, or geiko in the Kyoto dialect, are not prostitutes; they are “women of the arts,” entertainers highly trained in art, music, and dance.

How to get to Gion

Gion is located to the north and south of Shijo Street, from the Kamo-gawa River in the west to the Yasaka-Jinja Shrine in the east.

To reach Gion, use your Japan Rail Pass to reach Kyoto Station. Then, take bus number 100 or 206 to the Gion bus stop.

Things to do in Gion

At the Minamiza Kabuki Theater, you can step back in time to experience this classical dance-drama, known for the elaborate makeup of its performers. A theater has stood at this location since the 1600s; the current structure was built in 1929.

For the foodie or simply the hungry traveler, Gion is packed with traditional teahouses, bars, and restaurants. Cafe Opal, inspired by London culture, is known as “the most soulful cafe in the world.” Shijo Avenue is the district’s shopping area. Traditional craft shops can be found on Nawate-Dori, Shinmonzen, and Furumonzen Streets.

Traditional shrines and temples are located throughout the district. Gion is home to the Yasaka-Jinja shrine, formerly named Gion Shrine, which has been called Kyoto’s “spiritual lodestone.” This shrine is located on Gion’s eastern edge.

A small Buddhist temple called Chugen-Ji or Meyami Jizo is located nearby. At the tori gate shrine of Yasui Kompira-gu, people write wishes on small wooden tablets called ema and tie them near the altar. There is also a “power stone” with a hole in the middle that people crawl through to symbolize rebirth and to break bad habits or better their relationships with others.

The Kennin-Ji temple is the city’s oldest Zen temple, dating from 1202. The Tatsumi Jinja shrine, known as the “Home of the Gods of Gion’s Harvest,” is the location where authorized apprentice geisha first make public appearances.

The Shirakawa Area, along with Hanami-Koji Street from Shinjo Avenue to Kenninji Temple, are Gion’s most iconic areas. The Shirakawa Canal, which runs parallel to Shijo Avenue, is lined with willow trees, tea houses, and high-end restaurants. Shirakawa is the quiet side of the Gion.

Hanami-Koji means “blossom viewing lane” and indeed it is a place where you can see the cherry blossoms when the spring begins. To the south of Shijo, Hanami-Koji is a broad flagstone pavement, bordered on each side by ochaya, or traditional teahouses staffed by geisha. One of these, the Ichiriki Chaya, is over 300 years old.

Most visitors to Gion hope to spot or be entertained by a geisha, and the Hanami-Koji’s Gion Kobu Kaburenjo theater, or Gion Corner, offers the most accessible experience. A cultural show is held there daily, aimed at introducing foreign tourists to Japanese arts such as tea ceremony, ikebana flower arranging, bunraku puppet theater, and dances performed by real maiko.

The origins of the Gion Matsuri, or Gion Festival, can be traced to the year 869. Today, it is considered the most famous festival in Japan. A parade begins at the Yasaka Shrine. The floats of this festival span 25 meters in height and weigh as much as 12 tons; the float wheels may be taller than you are!

Dozens of floats represent the different neighborhoods of Kyoto. The streets are closed to traffic and are lined with food and game stalls called yatai, where you can enjoy treats such as ramen and yakitori. This festival takes place during the month of July.

Gion’s atmosphere begins to change in the early evening, when apprentice geisha, called maiko, can be seen traversing the lantern-lit streets or announcing live entertainment at bars and restaurants. Today, there are less than 1,000 geisha remaining. You can recognize them by their white makeup and traditional kimonos. Don’t forget to take in the riverside scenery, most vivid at sunset.

You can book and customize private walking tours of the city at night using services such as Viator. Remember that evenings in Kyoto can become chilly, even during the warmer months, so be sure to dress accordingly.