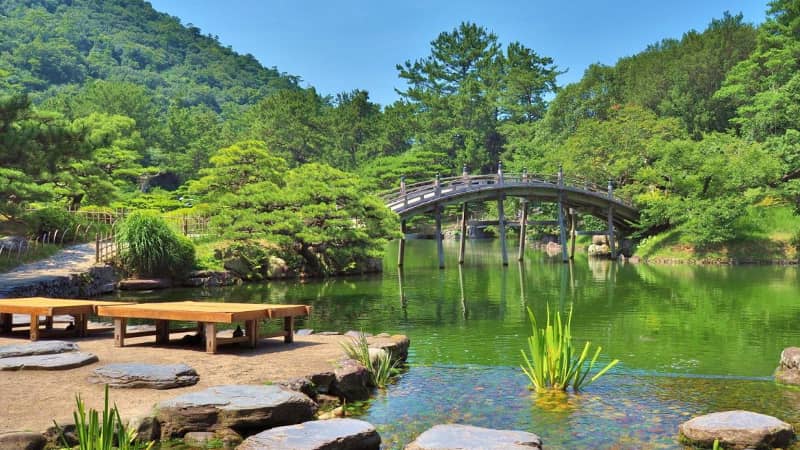 Takamatsu is one of the core Japanese cities, located in the Kagawa prefecture in the Shikoku region. Situated on the shores of the Seto inland sea, it is an important port city and one of the main entry points to Shikoku Island from the main island of Honshu.

Takamatsu’s strategic location led to its creation as a castle town by the daimyō (feudal lords) during the Edo period. Its rich history can still be seen today, in both the remains of the once-grand castle and Ritsurin Koen, which dates back to the 17th century and is considered one of the msost beasutiful gardens in Japan.

How to get to Takamatsu

It’s easy to get from Tokyo to Takamatsu by train using the JR Pass. Simply take the Tokaido – Sanyo Shinkansen to Okayama Station, and then take the JR Marine Liner rapid train from Okayama to Takamatsu.

The journey takes roughly 5 hours to complete. The cost is fully covered by the Japan Rail Pass if traveling on Hikari and Sakura services. You can also travel from Takamtsu to Matsuyama on express trains on the Yosan line using the JR Pass.

A night train service, the Sunrise Seto, also operates daily between Tokyo and Takamatsu. The journey time is approximately 9.5 hours.

JR Pass holders are able to travel in “nobi nobi” floor space combatants on this train at no extra cost, but must pay an additional supplement to ride in a private compartment. It is necessary to make an advance reservation to travel on this service.

Alternatively, you can fly from Tokyo from Takamatsu in roughly 80 minutes. Daily flights operate from Haneda Airport, and the fare is typically 34,000 yen for a one-way adult ticket.

However, it is often much cheaper to fly to Takamatsu from Narita Airport: one way tickets can cost as little as 4, 000 yen. Frequent buses operate from Takamatsu Airport to the city center, and the bus ride only takes around 40 minutes.

Finally, you could opt to take a night bus from Tokyo or Shinjuku stations to Takamatsu Station. The trip takes around 10 hours and fares vary from 6,000 and 14,000 yen depending on dates.

What to see in Takamatsu

Most of the best attractions in Takamatsu are within a short walking distance of the central Takamatsu Station, and include:

While in the area, you might also want to consider a day trip to nearby Yashima, just a short train ride from Takamatsu. Here you can find Shikokumura, an open air museum that preserves several traditional Shikoku houses, and well as a small art museum containing serveral pieces of work by Pablo Picasso.

What to do in Takamatsu

Vsitors to Takamatsu can keep themselves busy with the following popular activities:

While in the Seto Inland Sea area, you should also consider a day trip hopping between the small islands off the cost of Takamatsu, many of which are easily accessible by ferry. Particularly of note is Naoshima Island, which is home to a number of unique art installations, including its famous giant pumpkin statue.