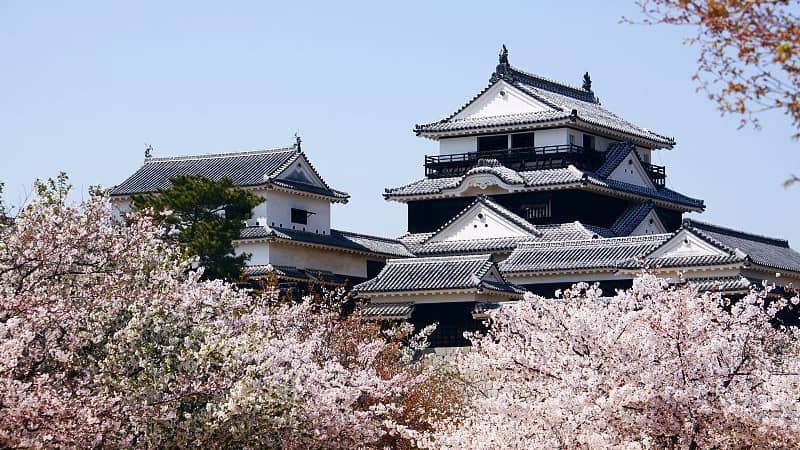 Capital of the Ehime prefecture and the largest city on Shikoku Island, Matsuyama has lots to offer tourists in Japan.

In addition to its famous castle and hot springs, Matsuyama is home to important museums including The Museum of Art, Ehime and The Shiki Memorial Museum.

Matsuyama merged with several other townships during the 20th to create the city that exists today. It is now home to over half a million people.

How to Get to Matsuyama

Japan Rail Pass holders can reach Matsuyama by train from Takamatsu or Okayama without paying any additional fees.

To get from Tokyo to Matsuyama using the JR Pass, you should take Hikari or Sakura trains to Okayama before transferring to the limited express service mentioned above. The entire journey takes around 6 hours 30 minutes.

A slightly faster option would be to take the JR Tokaido-Sanyo Shinkansen from Tokyo to Okayama, however, Nozomi trains are not included in the Japan rail pass.

If you’re not traveling by train, you can take a highway bus to Matsuyama. There are also flights from Tokyo and several other Japanese cities to Matsuyama Airport.

What to See and Do in Matsuyama

Matsuyama is best known for Matsuyama Castle and Dogo Onsen. Both offer an insight into the history of the region. The old port is also well worth visiting when in the area.

Matsuyama Castle is a must-see when visiting Shikoku Island. A castle was first built on the site in the early 17th century by Kato Yoshiaki, a Japanese daimyō and general.

It is one of 12 surviving original Japanese castles. The castle as it stands today dates back to 1854 after earlier versions burnt down twice, in 1642 and again in 1784.

Matsuyama Castle sits on a hilltop in the center of Matsuyama Koen Park. You can either climb up or take the Matsuyama Ropeway which will get you to the top of the park in a few minutes.

Inside the castle, there are exhibits and displays explaining the history of Matsuyama and the feudal period.

Boasting over 1,000 years of history, Dogo Onsen claims to be the oldest onsen hot spring in Japan.

The bathhouse currently built on the site is from 1894 and was frequented by the Japanese writer Natsume Sōseki. The writer references the springs in his 1902 novel, Botchan.

Dogo Onsen Honkan offers stone-built public baths for men and women. The main bath on the first floor is called Kami no Yu meaning ‘Bath of the Gods’. On the second floor, you’ll find a smaller bath called Yama no Yu or ‘Bath of the Spirits’.

A section of the Honkan, the Yushinden, was built for the Imperial Family at the end of the 19th century. You can enjoy a short guided tour of this elaborately decorated area of the bathhouse, which was reserved for visiting emperors.

To learn more about the history of the springs, you can take a look at the displays of old documents such as admissions tickets.

Don Onsen Honkan is a great place to relax and understand more about Japanese history and culture.

Mitsuhama is Matsuyama’s port, separated from the rest of the city by the Miyamae River. Mitsuhama has existed as a fishing and commercial district for many years and has retained its old-world feel. Many of the buildings in the area have been standing for over 100 years.

Visit the port in the morning to experience the fish market, or have a stroll through the narrow streets to enjoy the historical atmosphere.

Mitsu Station was one of the first stations to be built on Shikoku Island. The original station was built in 1888 and rebuilt in 2009 maintaining the traditional style.

Things to Do and Other Attractions in Matsuyama

There are several other places worth seeing in Matsuyama, including:

Foods to try in Matsuyama and the Shikoku region

The Ehime prefecture is the largest citrus-fruit-growing region in Japan. Matsuyama, in particular, is known for its mandarin oranges, or mikan. Whilst in the town, try mikan specialties including ice cream, beer, and juices.