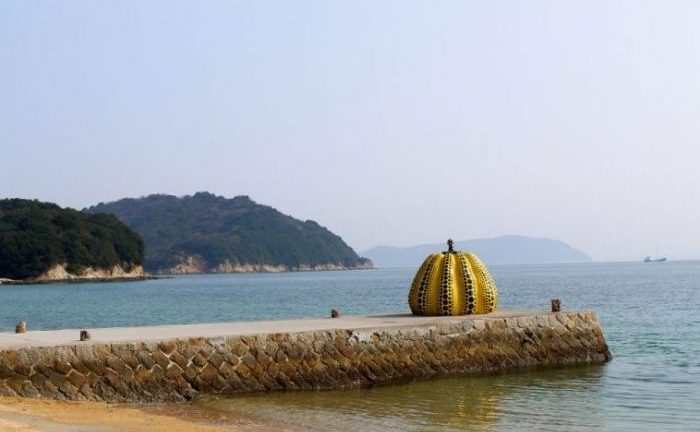 Imagine walking in the sands of a beautiful island in the Seto Inland Sea. You approach a concrete pier jutting out into the water. Rather than your usual retinue of fishermen and tourists, you are greeted by an enormous black and golden pumpkin.

The scene described is no fairytale or dream. It is part of the sculptures and modern art for which the island of Naoshima is known. The island enjoys sunny weather and rural living that rivals that of Europe’s Mediterranean region.

Located in the Seto Island Sea, south of Okayama, Naoshima is popularly known as “an art island.” Its transportation system is well equipped for tourism, and its 20 plus art exhibits and museums take a full day, or more, to fully appreciate. Even if you have only a little time, this island is an intriguing and worthwhile excursion.

Your travels to Naoshima will likely begin at one of Japan’s larger cities popular with international tourists, such as Tokyo, Kyoto, or Osaka. Whatever the starting point, you will be passing through Okayama to get to Naoshima, as described below. The railway trip is covered by your Japan Rail Pass.

From Tokyo Station, board the Hikari train and travel on the JR Tokaido or Sanyo Shinkansen Line to Okayama Station, a trip of about four hours. Proceed from Okayama as described below.

One direct Hikari train runs on the JR Tokaido / Sanyo Shinkansen Line from Kyoto Station to Okayama per hour. This trip takes about 90 minutes. Proceed from Okayama as described below.

From Shin-Osaka Station, take the JR Sanyo Shinkansen Line to Okayama using either the Sakura or Hikari train. This portion of the trip lasts approximately 45 minutes. Proceed from Okayama as described below.

From Okayama Station, take the JR Uno Line to Uno Station. You may be required to transfer trains at Chayamachi Station. From Uno Station, walk across the street to the ferry terminal.

Please not that the ferry passage is not included in the JR Pass and costs ¥290 one way. The 20-minute boat ride will arrive at one of two ports on Naoshima, either Miyanoura Port on the west side of the island or Honmura Port to the east.

Getting around the island

Most ferries arrive at Miyanoura Port. The ferry terminal provides coin lockers for your luggage as well as bicycle rentals. Standard bicycles can be rented for ¥500 per day, electric bicycles for ¥2,000 per day.

Most of Naoshima’s attractions are located on the southern half of the island – the north is occupied by a Mitsubishi industrial site. One or two buses run each hour. Each bus ride costs ¥100. The ride from Miyanoura to Honmura takes around 10 minutes, and the Art House Project and Ando Museum are within walking distance of the Honmura terminal.

The ride south to the Tsutsujiso bus stop lasts around 15 minutes. This stop is located at the east gate of the Benesse House complex, and from there you can take a free shuttle bus to the Chichu Art Museum, Lee Ufan Museum, or Benesse House. Each of these attractions is located five to 10 minutes from the bus stop.

Things to do in Naoshima

Naoshima’s art installations, museums, and architecture are not to be missed. The Chichu Art Museum, for instance, is unusual in that it is located almost completely underground yet used natural light to illuminate the artwork. The Lee Ufan Museum features the work of its namesake, a Korean artist who lives and teaches in Japan.

The Benesse House complex includes an art museum, outdoor art displays, restaurants, shops, and accommodations. Its four buildings are known as the Museum, the Oval, the Park, and the Beach. It is here that famous exhibits such as Yayoi Kusama’s Yellow Pumpkin, mentioned at the outset, can be viewed.

Each of the afore mentioned buildings was designed by famous architect Ando Tadao, whose activities are documented in the Ando Museum in Honmura. Many of the island’s municipal buildings, including schools, were designed by architect Ishii Kazuhiro. The Art House Project in Honmura has transformed abandoned houses, workshops, temples, and shrines into structural works of art and venues for Japanese artists. When on Naoshima, simply look around – artwork is everywhere!

Naoshima, along with neighboring islands, is also home to the Setouchi International Art Festival, held once every three years. A highlight among these islands is Teshima, which holds the Teshima Art Museum, a unique installation made of a freestanding concrete shell.

Whether an art lover, nature enthusiast, culturalist, or avid traveler, you are certain to enjoy the unique island of Naoshima. Check out our other travel guides and destinations and begin planning your next Japan vacation today.