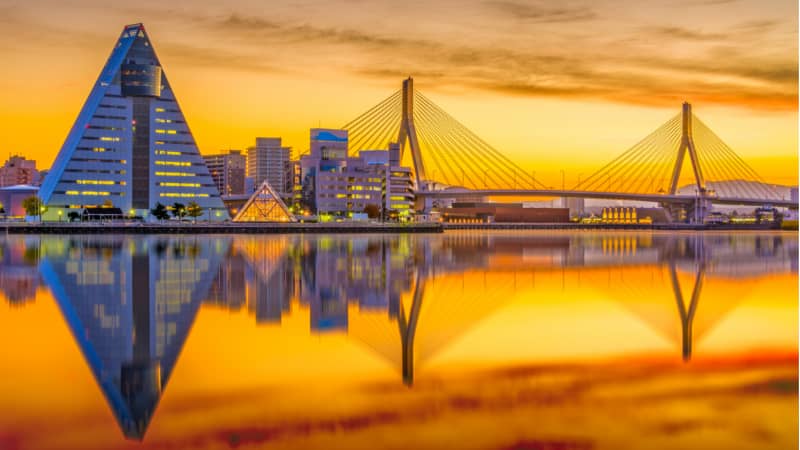 Aomori prefecture, located in the Tōhoku region of Japan, boasts a number of spectacular natural landscapes that shouldn’t be missed on a trip to the country.  It’s also home to the northernmost prefectural capital city on the main Japanese island of Honshu, Aomori city.

This port city dates back to Japan’s early Edo period and continued to be the main departure point from Honshu to Hokkaido for centuries until the opening of the Seikan Undersea Railway Tunnel in 1988. However, although it has lost its status as a primary transport hub, there is still much in Aomori to entice JR Pass holders to make it a main destination on their travel itinerary.

How to get to Aomori from Tokyo

Visitors who wish to visit Aomori from Tokyo have several transportation options to choose from, including taking a Shinkansen bullet train using their Japan Rail Pass, traveling by bus, or flying to the prefecture from Japan’s capital.

Holders of a JR Pass can reserve a seat on a Hayabusa train on the Tohoku Shinkansen to Shin-Aomori station, located just a 6-7 minute train ride from Aomori station in the prefectural capital.

They can change to a limited express or local train bound for Aomori station. There is approximately one connection per hour. The entire trip from Tokyo to Aomori by train takes roughly 4 hours and the fare is fully covered by the Japan Rail Pass.

Those who would prefer to travel to Aomori by bus can take one of the numerous highway buses which operate day and night from both Tokyo station and Shinjuku station. The bus journey takes approximately 11 hours.

Additionally, several flights operate daily from Haneda Airport in Tokyo to Aomori Airport, and the one-way trip only takes approximately 80 minutes. Once at Aomori Airport, you can take a JR bus to reach Aomori city’s central train station in just 35 minutes. The bus fare is fully covered by the JR pass.

Many of the most enticing attractions in this northern prefecture are located in the capital city of Aomori itself, and none is more famous than the unique Nebuta Matsuri festival which takes place annually from 2-7 August.

This popular summer festival in Japan stands out for the large number of huge lantern floats employed in the colorful central parade which takes place daily. The enormous floats take almost a full year to construct, and commonly portray a number of famous characters from both Japanese history and pop culture.

However, even if you don’t manage to visit Aomori during August, you can still experience the spirit of this Matsuri at the Nebuta Warasse museum in the city center. This art space hosts a number of lanterns and floats used in previous celebrations, and dancers and musicians involved in the festival often perform live during weekends and holidays.

Other attractions in Aomori city well-worth a visit include the two central fish markets, Furukawa and Augu, where visitors can sample the fresh seafood which has become a renowned export of the prefecture. Additionally, those interested in Aomoris’ long history should visit the Jomon Archaeological site to experience a number of carefully reimagined prehistoric structures.

Getting to the city’s main attractions is easy, as many are located within walking distance of Aomori station. However, it may be necessary to take a JR bus to get to the Jomon site, as it is roughly a 20-minute bus ride outside of the city center.

Things to do in Aomori prefecture

The greater Aomori prefecture offers a huge range of dramatic natural scenery and sites of historic and cultural importance for visitors to explore. Some of the most popular attractions in Aomori prefecture include:

Travelers planning to visit Aomi prefecture during May should also consider a trip to Yokohama to experience the Rape Blossom Festival that takes place in the town every year. A helicopter sightseeing flight over the vast number of vibrantly blooming fields is highly recommended.