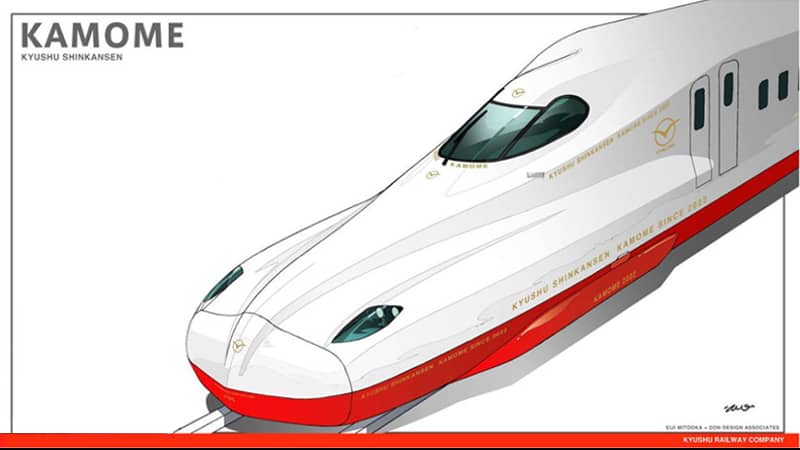 Rail operator JR Kyushu has revealed its design plans for the new Kamome Snikansen train, the new train service planed for the future extension of the Kyushu Shinkansen line connecting by Shinkansen Fukuoka and Nagasaki with ease.

In the meantime: How to travel from Fukuoka to Nagasaki

Kamome is the Japanese word for “Seagull”, a symbol that is emblazoned on the exterior of all trains from Kyushu Shinkansen line. This logo is composed of a minimalistic bird in flight surrounded by three circles and traditional Japanese calligraphy.

This train is not the first to be called Kamome, a name that has been used for other rail services in west Kyushu. Most notably, this includes the limited express train that connected Nagasaki and Kyoto in 1961.

The train also features colors of red and white on the outside, with gold highlights completing the bold design. Japanese motifs such as “shishi” (meaning lion), arabesques, and chrysanthemum will don the seat covers to create a tasteful and cozy interior atmosphere.

A “dual supreme wing” design constitutes the nose of the train, improving aerodynamic flow by reducing wind resistance. Energy consumption is also decreased through the silicon carbide superconductors that are used in the driving system.

A series of improved safety features will also be present on the train, such as ATC (automatic train control), security cameras, and a braking system designed for earthquakes or other emergency situations. A battery-powered propulsion system will also enable the train to continue operating in the event of a power outage.

How many passengers can the Kamome Shinkansen hold?

The new Kamome Shinkansen train is a next-generation N700S series, with six cars. This is a variation of the JR central Shinkansen trains unveiled in the Tokaido line, which normally carries 16 passenger cars.

The Kamome Shinkansen will be able to hold up to 396 travelers, with 163 reserved seats in cars 1, 2, and 3. Non-reserved seats will be located in cars 4, 5, and 6 and there will be 5 seats per row with 233 total places available in this section.

When will the Kamome Shinkansen be operative?

The Kamome Shinkansen train is expected to be operational by September 23, 2022, alongside the opening of the western Kyushu Shinkansen route. Once the train becomes operational, you’ll be able to use your JR pass to travel along the line.

To activate your JR Pass, visit a ticket counter in one of the major train stations along the Kyushu Shinkansen line. As mentioned above, many of the seats on this train will be reservation-only, so be sure to book your seat in advance at a ticketing counter.