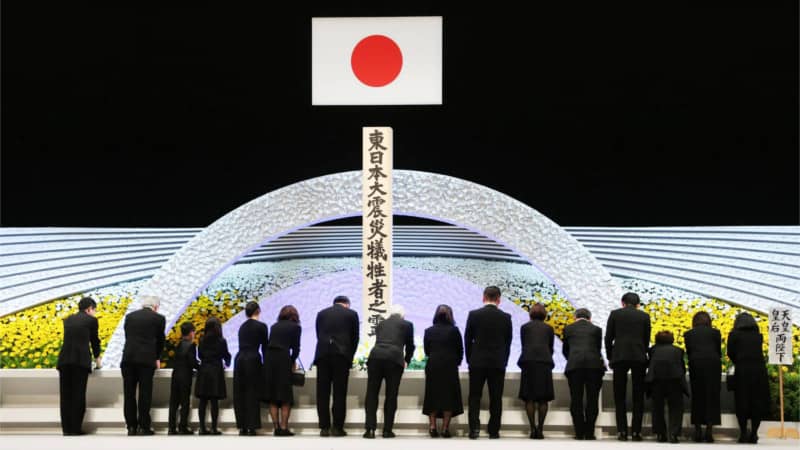 On March 11th, 2011, an earthquake and tsunami hit the shores of Tohoku northern Japan and caused huge amounts of damage across vast swathes of land, destroyed towns and villages, and triggered the Fukushima nuclear plant accident

Every year since 2012, Japan has held yearly gatherings to commemorate the 15,900 people who died and 2,529 people missing after tremors from a magnitude 9.0 earthquake and a subsequent tsunami hit the north and east of the country.

The Fukushima tsunami left a huge mark on the Japanese psyche and led to years of large-scale recovery operations in the affected region and the implementation of numerous earthquake-related protective measures across Japan, including new safety protocols on Shinkansen trains.

On the March 11th anniversary of the disaster, residents and government officials alike gather to pray together at local town halls, and a main memorial event attended by the Imperial Family is held in Tokyo and televised live across Japan.

Additionally, a moment of silence is observed throughout the country at 2.46 pm for participants to remember where they were when the earthquake struck and reflect on those they may have lost in the aftermath.

Cancellation in 2020 due to coronavirus

Due to restrictions to contain the spread of COVID-19 in Japan, most earthquake and tsunami memorial events were called off in 2020 following then-Prime Minister Shinzo Abe’s request to cancel, postpone or downsize public gatherings.

Nevertheless, hundreds of people across Japan were still able to attend ceremonies held in parks and cemeteries by following coronavirus safety precautions such as wearing a face mask and maintaining safe social distances.

Additionally, Abe dedicated flowers and delivered a televised silent prayer and address from his office in an alternative to the traditional memorial commemorations. During his speech, Abe confirmed that reconstruction of areas hit by the disaster was now “at its finishing stage”

He also expressed optimism for the future of the country after it is safe to travel to Japan, saying, “I would like many people from around the world to experience the reality of the disaster-hit areas on their way to recovery through the upcoming Olympics, Paralympics and other occasions”.

After the cancelation of the 2020 events due to coronavirus concerns. Chief Cabinet Secretary of Japan Katsunobu Kato confirmed that a state-sponsored Tohoku earthquake memorial will be held at Tokyo’s National Theatre on March 11th, 2021, and is open to the public.

Kato stated that Emperor Naruhito and Empress Masako are scheduled to attend the memorial, with the latter confirmed to give a speech during the event, as well as current Japanese Prime Minister Yoshihide Suga.

Nevertheless, he stressed that strict COVID-19 safety measures will be implemented for the event and that the public will not be permitted to lay flowers during the memorial as has become customary.

Kato also confirmed that this 10th-anniversary commemoration is the last large-scale earthquake and tsunami memorial that the state plans to organize, although he remained confident that smaller-scale local celebrations would continue across Japan for years to come.

Although they may not be able to witness a large-scale earthquake memorial in Japan after 2021, those traveling to the country in the years to come may still be able to experience smaller scale commemorations, especially in the areas most affected by the Fukushima tsunami.

If you do travel through the Tohoku region by train during early March in the future, you’ll be able to experience a number of memorial ceremonies in towns across Fukushima Prefecture as the date of the anniversary approaches.

Additionally, travelers to the prefecture who are curious about the effects of the earthquake and the tsunami are advised to visit the Great East Japan Earthquake and Nuclear Disaster Memorial Museum in the town of Futaba. This newly opened facility aims to educate visitors about the impact of the March 2011 events and the recovery effort in the affected region.

Cover picture: A memorial service for the 2011 earthquake and tsunami held by government in 2019 – Photo credits by KYODO