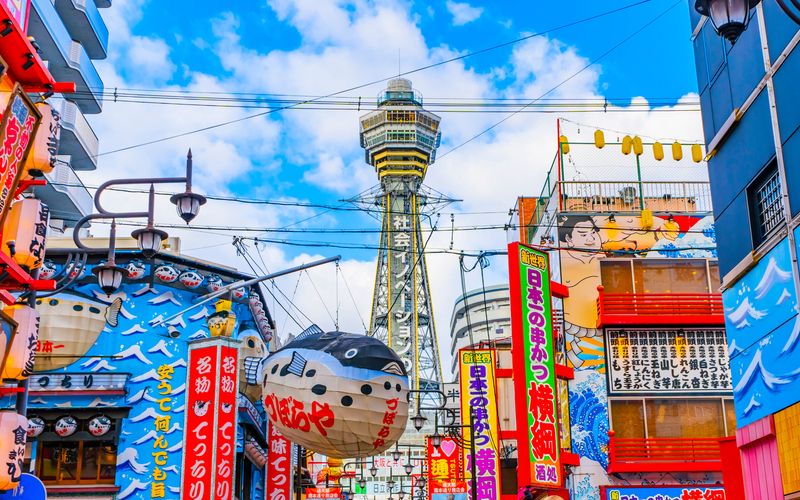 Shinsekai means “New World” in Japanese. This Osaka neighborhood is home to cheap foodie favorites, dive bars, and other colorful surprises. Check out our guide to safely enjoying this step back in time.

The history of Shinsekai

In 1903, the National Industrial Exposition brought over five million people to the Shinsekai neighborhood over the course of five months. After the expo, work began on Shinsekai’s current layout, which was completed in 1912. The northern end of the neighborhood was modeled after Paris, France and the southern half after New York City’s Coney Island. Complete with an amusement park and an aerial tramway, Shinsekai was a flourishing tourist area and an example of modernity.

In time, though, the area faded into anonymity and stigma. Little redevelopment was accomplished after the rigors of World War II, and Shinsekai slipped into poverty. Walking the streets of Shinsekai remains a nostalgic trip into the past, as many of the storefronts have remained virtually unchanged since the 1950s.

Today, the classic mystique of Shinsekai is threatened by gentrification. In time, older, unique restaurants may be overtaken by chic new establishments.

How to get to Shinsekai

Shinsekai is located beside the downtown Minami area of Osaka City, to the west of Tennoji Park. Use your JR Pass to take the JR West Osaka Loop Line to JR Shin-Imamiya Station. Locate the station’s east exit. Shinsekai is a 10-minute walk from the station.

From Shinsekai, it is a half hour walk to Dotonbori. If visiting this area also, you can use the JR Namba Station.

What to do in Shinsekai

Shinsekai is a budget traveler’s dream and a foodie paradise, home to fascinating landmarks.

The Tsutenkaku Tower was first built in 1912. Its design combined the Eiffel Tower and the Arc de Triumphe. At 64 meters in height, it was then the second tallest structure in Asia. Following fire damage, the tower was scrapped during World War II but rebuilt in 1956.

Tsutenkaku is aptly named the “sky route tower” or the “tower reaching to heaven.” It is 103 meters in height, with an observatory placed at a height of 91 meters. An open-air deck is positioned on top of the observatory. From its summit, you can gain an unobstructed, panoramic view of Osaka. 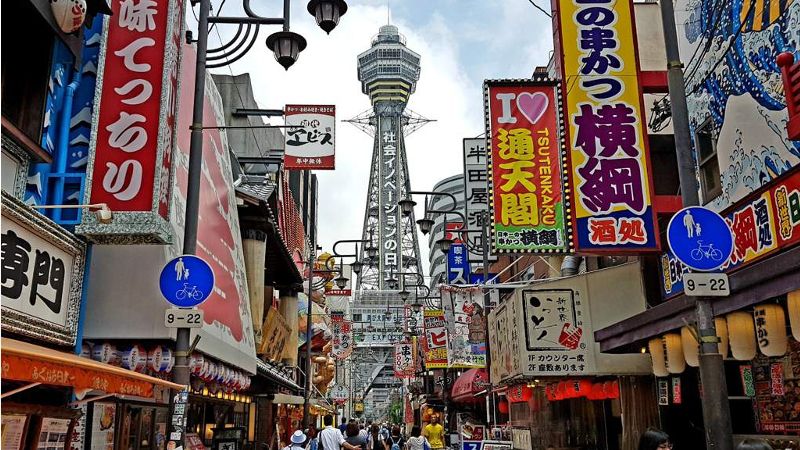 Tsutenkaku Tower is open from 9 am to 9 pm daily. Admission is 700 yen, with an additional 500 yen for the open-air deck. The tower features multiple souvenir shops, a diorama of the original tower and amusement park, and the manga-themed Kinnikuman Museum. At night, it is lit by color changing LED lights.

JanJan Yokocho Alley runs along one side of Shinsekai. It is a covered dining and shopping street home to cafeteria-style restaurants with surprisingly unique menus as well as Japanese-style bars and pubs. Its name comes from the strumming sound of stringed instruments that waitresses once played to attract customers. 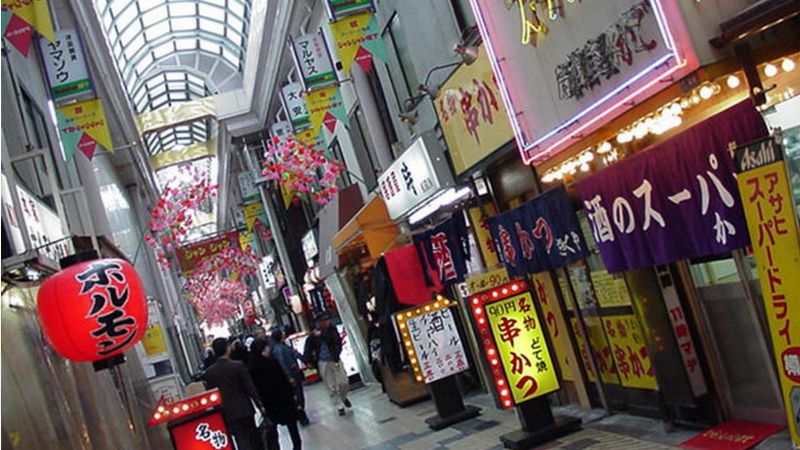 JanJan Yokocho is an entertainment district frequented by locals and therefore offers more of an authentic look at Japanese culture than do many tourist areas.

Billiken, “the god of things as they ought to be,” was created by an American illustrator in the early 1900s. A Billiken statue was installed at Luna Park, but disappeared after the park closed in 1923. In 1979, a new Billiken statue arrived at Tsetenkaku Tower, and he has since become the “mascot” of the area. 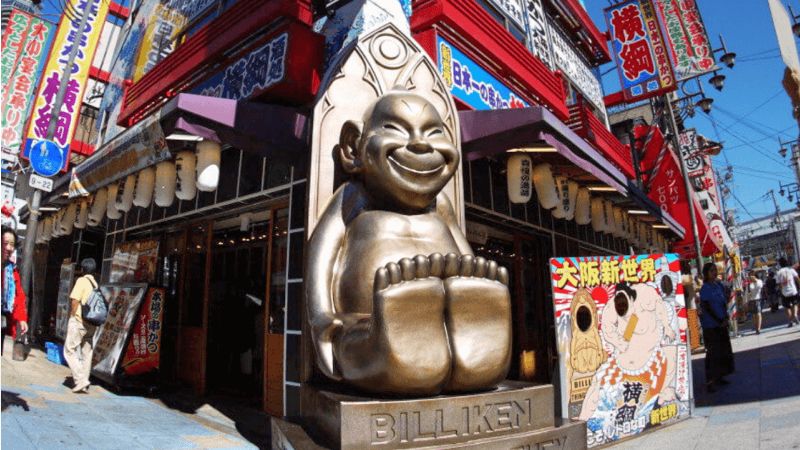 Billikens of all sizes are now found throughout Shinsekai. Rubbing the feet of the statue, purchasing a Billiken, or receiving one as a gift is thought to ensure good luck.

Shinsekai is well-known for kushi-katsu, a dish of deep-fried, skewered vegetables and meats. Kushi-katsu isn’t limited to staples like pork and chicken. Unique varieties include pumpkin, asparagus, banana, ice cream, mochi, and more. You’ll find kushi-katsu restaurants and stands at regular intervals, and many are open 24 hours a day. Whether snacking or endeavoring to fill the void, kushi-katsu is also an affordable option at about 150 yen each. Ramen shops are also common.

If you’re feeling adventurous, Shinsekai is home to several fugu restaurants – the notorious blowfish dish that is both delightful and dangerous to consume. The most famous is Zuboraya. You can’t miss the restaurant’s iconic blowfish-shaped giant lantern.

Some travel bloggers have described Shinsekai as “precarious” or even “seedy.” But, you may wonder, is it dangerous for tourists to visit?

Lonely Planet once called Shinsekai the “closest thing in Japan to a dangerous neighborhood.” Homelessness, prostitution, and public intoxication are common. Said one resident blogger, “While relatively safe in the daytime, you really need to keep your wits about you at night.” Use good judgment, and don’t wander the streets alone. Females may feel uncomfortable in the red light district. According to some sources, Shinsekai’s reputation is due more to its differing from the high standard of safety in Japan than to true danger.