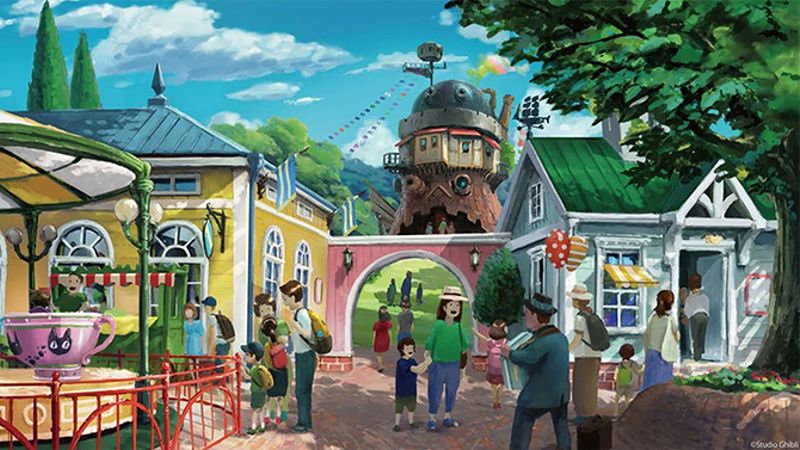 Children around the world have grown up with beloved animated films from Hayao Miyazaki and Studio Ghibli. Since 1984, Studio Ghibli films have often served as an introduction to the wider world of anime and have obtained a cult following all their own.

Many Ghibli fans have already made a pilgrimage to the popular Studio Ghibli museum in Tokyo. Others eagerly anticipate the release of the upcoming Ghibli film, How do you Live? But fans will be thrilled to learn that the Ghibli theme park opened on November 1, 2022, and is now bringing the films to life in Nagoya!

How to get to Studio Ghibli Theme Park

The park is located in the Expo 2005 Aichi Earth Memorial Park, also known as Moricoro Park. Expo Park has long been an attraction for Ghibli fans, as it had already featured a full-scale replica of the home of Mei and Satsuki from the film My Neighbor Totoro.

Nestled in the countryside east of Nagoya, the park will be about a three-hour journey from Tokyo, one made easy by the use of the Japan Rail Pass. You can also get to Nagoya easily from Osaka and Kyoto by Shinkansen train (Tokaido Shinkansen).

From Nagoya, you can easily take a short ride on a shuttle bus from Meitetsu Bus Center at Nagoya Station directly to the park gates. Alternatively, you can take the Higashiyama Subway line to Fujigaoka Station, then transfer to Linimo line to Aichikyūhaku-kinen-kōen Station, which is right next to the park entrance.

The Ghibli Park spans 17 acres out of the almost 200 hectares that make up the wooded hills of Moricoro Park. Interestingly, Miyazaki insisted that no trees be cut down in the formation of the park to celebrate the natural beauty that inspired Ghibli’s lush animation.

There are rides, but the massive rollercoasters that dominate many theme parks are avoided in favor of nature trails that will feel as if they are taken right from the movies. It is meant to be “a hybrid place, between a park and a museum,” said Goro Miyazaki, the son of the studio’s main creative force.

Those arriving at the park’s entrance gate are greeted by the sight of the grinning ‘Catbus’ from My Neighbour Totoro. From there, and true to form for Ghibli, it’s almost like walking into the past.

Throughout the park, themed play areas, galleries, and cinemas exist side-by-side with impressive statues of Ghibli creatures. Each area is described in detail below.

This section also features European-style brick buildings and buildings reminiscent of the Seiseki-Sakuragaoka Tokyo neighborhood antique shop from Whisper of the Heart.

Also called Ghibli’s Large Warehouse or Big Ghibli Warehouse, the Warehouse is be situated on the former site of a large swimming pool. It is an indoor attraction that can be enjoyed at any time of the year, regardless of the weather.

Inside, you’ll find 13 life-size replicas that recreate key moments from the studio’s classic films, including scenes from Spirited Away, From Up on Poppy Hill, and Porco Rosso.

The Warehouse also features a children’s playground based on My Neighbor Totoro as well as the sky garden from Laputa: Castle in the Sky. There is also an area that resembles the setting for the 2010 movie ‘Arrietty’.

Other highlights include an exhibition room, a cinema, shops, restaurants, and a literal warehouse in which revolving temporary exhibits will be stored, including a display on the foods that appear in Studio Ghibli films.

Mononoke Village, based on the film Princess Mononoke, will transport visitors back to the Muromachi period (1336 to 1573) in which the film is set. It recreates Tatara-ba, or Irontown, named for a traditional Japanese metal smelting furnace.

The area will be inhabited by figures of the spider-like tatari gami, the god of destruction; the boar god, Lord Okkoto; and other mystical creatures.

There will also be a free area next door to the village which will house a playground based on The Cat Returns that anyone can play in without charge.

Also called the Valley of Witches, this colorful area will feature attractions themed after Kiki’s Delivery Service and Howl’s Moving Castle, including the castle itself, the hat shop from the film, and Kiki’s family home.

The bakery where Kiki lives and works will also be recreated and visitors will be able to buy bread just like that shown in the movie. The area is also expected to house a teacup ride decorated with Kiki’s cat Jiji.

Based on My Neighbor Totoro, this area resembles the Show period (1926 to 1989). The area expands on the existing structure of the Kusakabe’s house from the film, originally constructed for Expo 2005.

It is also home to a giant Totoro statue, and a large wooden playground on the hill behind the house that blends into the surrounding countryside.

Except for major school holidays, Ghibli Park is open from 10 a.m.-5 p.m. on weekdays (although it’s closed on Tuesdays unless it is a holiday). On public holidays and weekends, it’s open from 9 a.m.-5 p.m.

Visitors have to buy a ticket in advance online for each individual area of the park, as there is no ticket for general admission currently available. Prices vary from JPY1,000 ($6.70) for Dondoko Forest and Hill of Youth to JPY2,500 ($16.90) for Ghibli’s Grand Warehouse (on weekends and holidays).

Before planning to visit Ghibli Park, you should be aware that the number of visitors is currently limited to 5,000 people per day, and that tickets are already sold out through the end of 2022.

However, online reservations from abroad are expected to open again in early 2023.

In the meantime, you can feast your senses on Studio Ghibli’s extensive film roster:

When you do visit Ghibli Park, you should be aware that the signs, exhibit descriptions, and directions are almost completely in Japanese. So you may want to bring a dictionary or translation app with you!