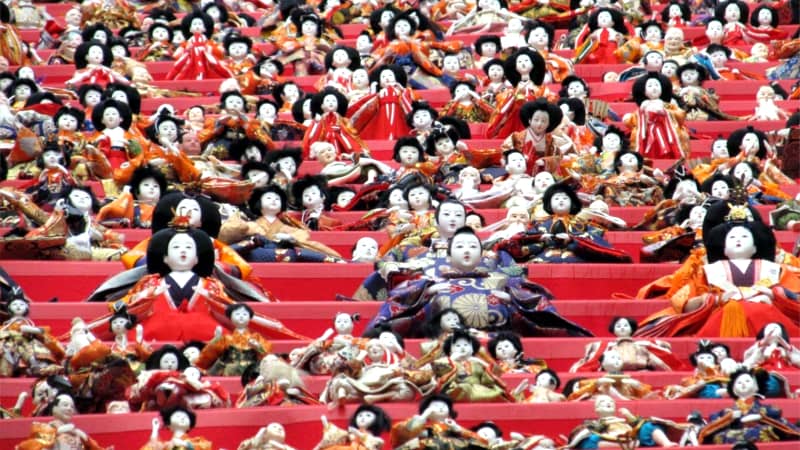 Hinamatsuri, also known as Doll’s Day or Girls’ Day, is an annual festival in Japan held to celebrate the health and happiness of female children and femininity in general.

The main tradition associated with the Hina Matsuri doll festival involves mounting an altar covered with a dankake (a red carpet) on which several platforms of hina-ningyō (ornamental dolls) in the traditional court dress of the Heian period are placed.

As hina dolls can be quite expensive (between $1,500 to $2,500 for a 5-tier set), they are usually passed down through generations as a family heirloom. Alternatively, grandparents often gift hina sets to baby girls in the family as soon as they are born.

Boys do not typically participate in Hinamatsuri, as a separate day, historically called “Boys’ Day” but now known as Children’s Day, is held on May 5th during Golden week in Japan.

When Hinamatsuri is held

Hina Matsuri is celebrated on the 3rd of March every year. It is one of 5 seasonal festivals in Japan (sekku) which were historically held on favorable dates of the Chinese calendar.

The other seasonal celebrations include New Year on January 1st, Tango no sekku on May 5th, the Tanabata Matsuri festival on July 7th, and Kikku no sekku on September 9th.

Hinamatsuri was traditionally known as Momo no Sekku or ‘the peach festival’, as it historically took place after winter when the peach trees in Japan began to flower. This is no longer the case since Japan has shifted to the Gregorian calendar, although the name still remains popular to this day.

Families usually begin setting up hina-ningyō altars in mid-February, but take care to put it away after Hina Matsuri is over.

In theory, this is to avoid the humidity of the rainy season in March, which could affect the dolls, but old superitions say that the daughters of the family will have trouble marrying if the altar is left up once the date has passed.

The history of Hinamatsuri

The origin of the festival dates back over 1,000 years to Japan’s Heian period, when ceremonies were held and special dishes prepared to celebrate the March sekku.

The modern practices of Hina Matsui stem from this time, when the tradition of making simple paper dolls called hitogata began to emerge.

One of the most interesting facts about Hinamatsuri is that these dolls were historically used as charms to ward off evil spirits. The traditional practice was to set a paper hitogata doll afloat down a river flowing into the sea, with the hope that they would carry threats of sickness and bad fortune away with them.

The tradition of displaying dolls on an altar in typical Japanese households did not emerge until the Edo period, influenced by a type of Japanese doll play called hina-asobi. Over time, Hinamatsuri gradually became associated with celebrating the health and development of young girls.

The dolls which make up a Hinamatsuri altar are dressed in the traditional court attire of the Heian period and represent the Emperor, Empress, attendants, and musicians that would have been present at a royal court during this time. 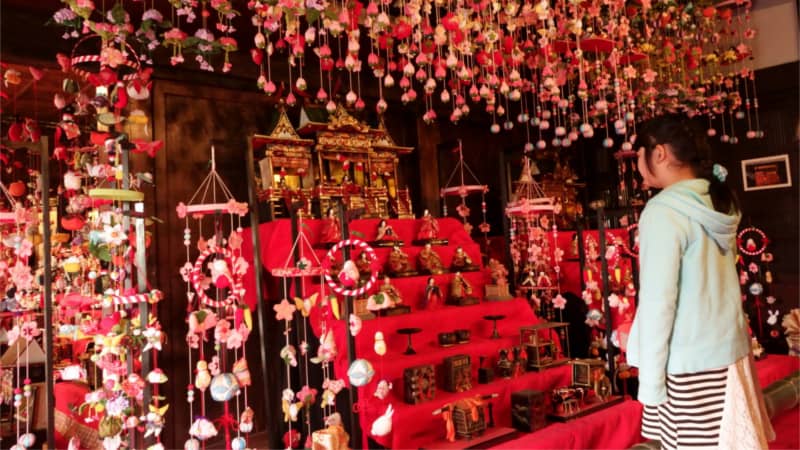 The altar is usually arranged in 5 to 7 tiers, with the accepted positioning as follows:

How the Japanese celebrate Hinamatsuri

Other than erecting a doll altar and decorating it with sprigs of peach blossoms, Hinamatsuri is commonly celebrated by holding parties for children in the days leading up to March 3rd.

It has become a festival known for the exciting range of traditional food served, including:

Reflecting the family-orientated nature of the festival, the typical drink served during Hinamatsuri is amazake, a non-alcoholic sake.

The most famous Girl’s Day event in Japan is Katsuura Big Hina Matsuri festival, held in the small seaside town of Katsuura in Chiba Prefecture from late February to early March.

Around 30,000 dolls are displayed in various locations around the town during this period, and there are a variety of stalls selling the traditional sweet treats associated with Hinamatsuri.

If visiting Tokyo during this period, you can also visit the famous Hundred-Steps Staircase at the Meguro Gajoen building and witness it absolutely covered in vintage Hinamatsuri dolls from across the region of Kyushu.

Finally, the ancient tradition of setting paper dolls afloat down a river is still alive in many parts of Japan during Hina Matsuri, especially at the Edo Nagashi Bina Festival in the Asakusa district of Tokyo.