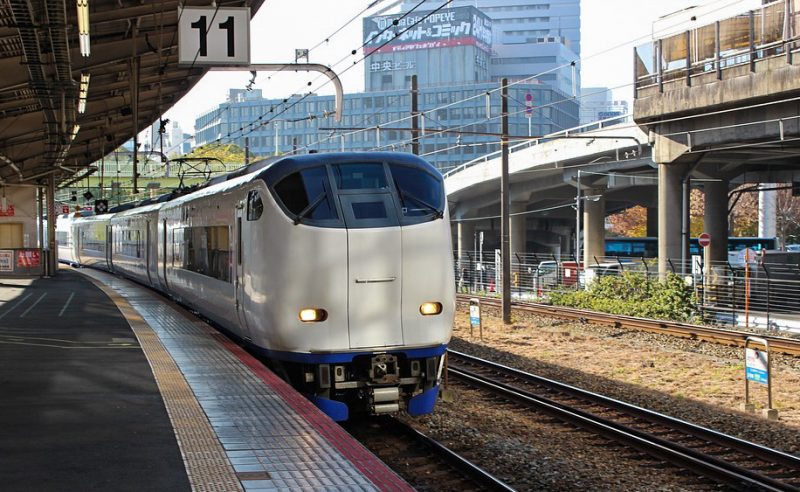 International travelers may find navigating the Japan Railway system to be intimidating, especially if trains are not used extensively in their country of origin. This trek, in particular, can be a bit confusing for first-time users of the Haruka service. This guide is designed to make it clear how to get to downtown Osaka and Kyoto for free on the Haruka Express.

The Haruka is a limited express, airport rail link train service. The train offers rapid service between Maibara (in the Shiga prefecture) and the Kansai International Airport (KIX), reaching speeds of 130 km/h (80 mph). While the use of this train generally requires both a train fare ticket and a limited express ticket, Japan Rail Pass holders are admitted free of charge.

Each train has six to nine cars, with at least one Green Car, or first class car. Two to three cars on each train are for non-reserved seating, and the remainder are for reserved seating. Each train contains restroom facilities, a vending machine, luggage racks, and is wheelchair accessible. Free Wi-Fi service is also provided. In the interest of passenger safety, smoking is prohibited on all Haruka Express train cars.

How to get from Kansai Airport to Osaka

Alternatively, you can also want to get on the previous station, at Tennoji Station, which is slightly closer to the city center.

Read More: How to get from Kansai Airport to Osaka

Apart from the Haruka Express, you can also use a Kansai Airport Rapid Service train, or Kanku-kaisoku, to travel directly to Osaka Station, although this is a slightly slower route than the Haruka.

The takes just over an hour and is also covered by the Japan Rail Pass. Buses and limousine services are also available from the airport to Osaka. Expect travel time using these methods to be about seventy minutes, with a fare of ¥1500.

Note: if taking the Rapid Service train back to Kansai Airport, sit in one of the first four cars, as the remaining cars depart for Wakayama at Hineno Station.

How to get from Kansai Airport to Kyoto

The Limited Express Haruka is the only direct train service from Kansai Airport to Kyoto station. The one-way trip takes around one hour and fifteen minutes and is free with the Japan Rail Pass. The itinerary is the same as going to Osaka, but getting off two stations later.

From the Kyoto station, you may use other JR lines (such as the JR Nara line) bus or taxi services to travel anywhere in the city or nearby.

The Haruka Express runs several times daily from the Kyoto Station to the Kansai Airport Station. The train also stops in Osaka at the Shin-Osaka Station and the Tennoji Station.

For other destinations here is the full list of stations served by the JR Haruka Express trains.

The Haruka makes thirty return trips daily, from Maibara to the Kansai airport and back, for a total of sixty one-way trips. Each one-way trip between the Airport Station and Kyoto station takes around one hour and fifteen minutes.

Trains depart every thirty minutes during the day and evening. From the Kansai airport, departures begin at 6:30 AM and continue until 10:16 PM. Trains run from 6:37 AM to 10:50 PM at Tennoji Station, from 6:17 AM to 9 PM at Shin-Osaka Station, and from 5:45 AM to 8:30 PM at Kyoto Station. Times may vary slightly on weekends and holidays.

You can check the timetables for both the Haruka Express and the Kansai Airport Rapid Service at the JR West official site: https://www.westjr.co.jp/global/en/timetable/

How to check the timetables

Once you pass through the ticket barrier at each station, you will see a timetable for the trains. Be sure to check the timetables for unexpected delays or boarding changes. Look for the name of the train line you are using and the direction (which stations are serviced) displayed at the top of the timetable.

You can then find the train type – in this case “Ltd. Haruka”), the train number, departure time, destination, and platform number scrolling across the digital screen. The departures are numbered from one to sixty. Odd numbered trains (one, three, five, etc.) run south toward the airport, while even-numbered trains (two, four, six, etc.) run north, toward Osaka and Kyoto.