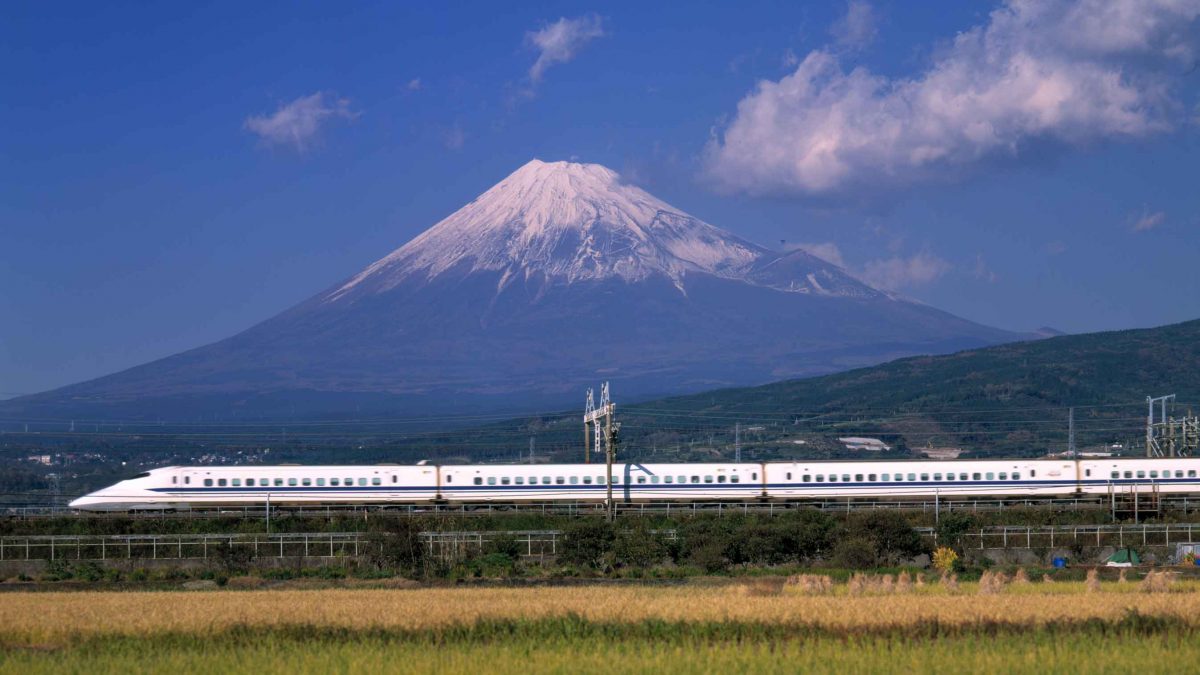 All over the world, scenic rail tours have been revived as an alternative to traditional sightseeing. Japan is no exception. A special term has even been coined in the Japanese language to describe those who are pleasantly obsessed with rail travel – densha otaku, literally translated “train nerd.”

If using your Japan Rail Pass to travel about the country, why not include some scenic views in your itinerary? There’s no better way to enhance the value of your travels than to make the journey, and not just the destination, part of the fun!

Most of the scenic trains listed below accept the JR Pass for all or part of the journey, and all offer a spectacular train view. Use this handy guide when planning your next train ride.

Mount Fuji from the Shinkansen

The Tokaido Shinkansen line is located in the Shizuoka Prefecture of the Kanto Region. The line passes between Tokyo and Kyoto, and right from your seat, you’ll be treated to the famous bullet train side view of Mount Fuji. Plan your seating according to your destination for the best viewing.

If you’re headed south to Nagoya or Kyoto, the mountain will appear to the right of the train; if headed north to Tokyo, the left. Access to the Tokaido Shinkansen line is completely covered by the JR Pass.

The Hisatsu Line is located in the Kumamoto Prefecture on the southern island of Kyushu. The island itself is full of attractions and beautiful scenery. The Hisatsu Line is known to pass through many areas that offer the best views.

Located in Osaka Prefecture of the Kansai Region, the Hanwa Line runs from Osaka City to Wakayama. In late March, the Hanwa Line is ideal for viewing sakura cherry blossoms. You’ll be delighted to find your train view filled with pink or white blossoms, often swaying peacefully in the breeze along both sides of the railway.

This line takes you to the northernmost reaches of the island of Honshu, from Akita Prefecture to Aomori Prefecture. This northern exposure makes the Gono Line ideal for winter viewing of Japan scenery. The rail line often runs alongside the Sea of Japan, placing you between the inland snowscape and the “raging winter seas” common to northern Japan, complete with mystical natural rock formations.

Views from the Gono Line have been described as “some of the best coastal scenery of any railway in the world.” You’ll also be treated to views of the beautiful Mount Iwaki.

Several types of trains service the Gono Line. If you’re looking for a truly opulent experience, try the Resort Shirakami. This luxury train is often booked up well in advance; do not fear, however – the local trains afford the same spectacular views. Additional special trains run during the summer months. Some trains offer live musical performances.

The Sagano Scenic Railway near Kyoto runs from Arashiyama to Kameoka. The train hugs the banks of the Hozugawa River and its accompanying ravine. The track is a mere seven kilometers in length, but the train operates at a purposeful, leisurely pace. The journey takes around 25 minutes one-way.

A trip on the Sagano Scenic Railway is enjoyable any time of the year, but it is especially popular during the autumn for koyo, viewing the colorful fall foliage.

This line runs from Gifu City through beautiful countryside to Toyama City, passing through two prefectures. Your views will include lush mountains snaked with rivers. In the distance, you may catch glimpses of two of Japan’s 100 Famous Mountains, Mount Hotaka and Mount Yarigadake, each towering nearly 10,500 feet (over 3,100 meters).

In winter, the mountains take on a different appearance as they don’t drift of snow. The journey will also take you through the town of Takayama, after which the line is named.

This train line was originally constructed to aid in the building of the Kurobe Dam. Converted to a sightseeing passenger train, travelers will enjoy an 80-minute ride spanning 20 kilometers through the Japan Alps. The railway is unique in its condensed usage of more than 40 tunnels and 20 bridges. Views include a forested ravine, a gurgling river, and majestic mountains.

No matter which train services you choose for your Japan Rail tour, you will certainly not be disappointed. Seeing Japan by train is a great way to enjoy an authentic Japanese experience.

3 thoughts on “Best scenic rides and train views in Japan”