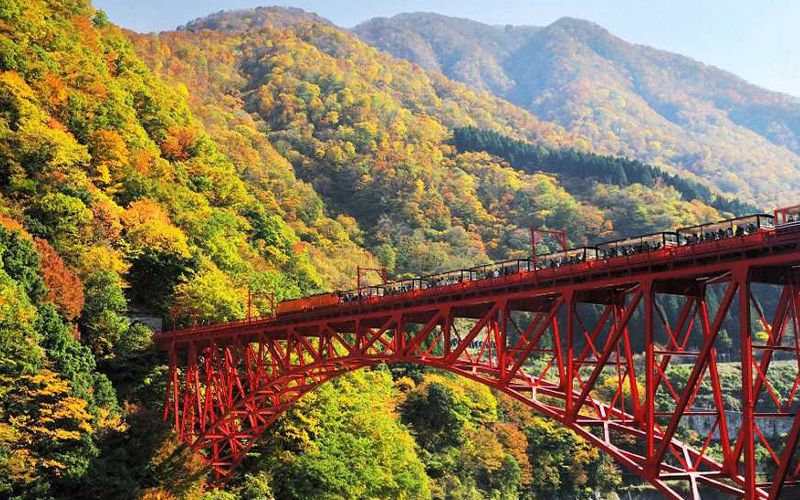 The Northern Japan Alps is a scenic volcanic mountain range spanning parts of Toyama, Nagano, and Gifu Prefectures. This range is home to the Kurobe River and one of the deepest and most beautiful forested ravines in the country.

The Kurobe Gorge is a famous destination for enjoying natural beauty. Visitors flock to this site to view stunning autumn colors and relax in natural hot springs. The Gorge makes an ideal day trip for hiking or viewing autumn leaves.

How to get to Kurobe Gorge

You can use your Japan Rail Pass to travel to and from Kurobe Gorge and these major cities. Please note that some trains or routes may not be covered by the JR Pass.

From Tokyo to Kurobe Gorge

Unazuki Station, from which the sightseeing trains depart, is a short walk from Unazuki Onsen Station.

From Kyoto or Osaka to Kurobe Gorge

Take the JR Thunderbird Limited Express to Kanazawa Station. Then transfer to the JR Hokuriku Shinkansen headed to Kurobe Unazuki Onsen Station. This portion of the journey takes about three hours and is covered by the JR Pass.

You can then take the Toyama Chiho Railway from nearby Shin-Kurobe Station to Unazuki Onsen Station. Then, walk to Unazuki Station.

The Kurobe Gorge Railway is one of the Gorge’s main attractions. Originally built to assist in the construction of the Kurobe Dam, the railway is now a sightseeing train. Most of the train cars are open-sided with four-person bench seats. Enclosed cars are also available.

The route of the Kurobe Gorge Railway winds through 20 kilometers of scenery between Unazuki Station and Keyakidaira Station. The route encompasses passage through more than 40 tunnels and 20 bridges. The trip takes approximately 80 minutes. 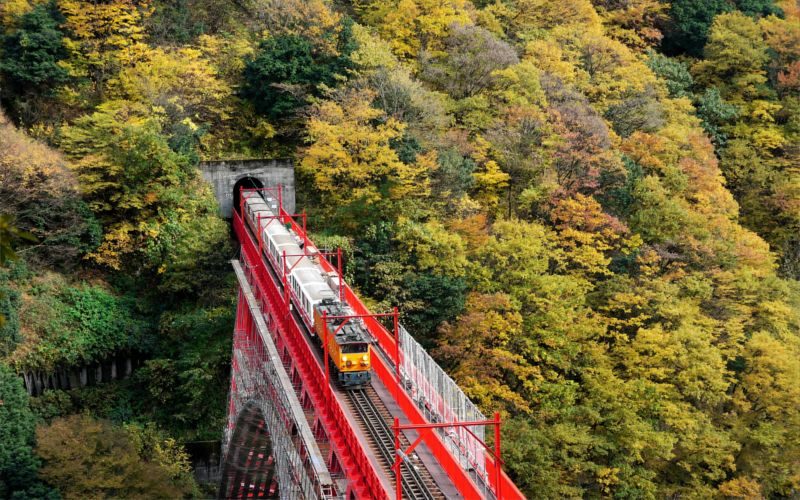 Stops along the route:

Check out the best things to do and see at each stop, below.

You can use the timetable below to plan your trip. Please note that the trains are operated seasonally from April to November. Trains and many activities shut down during the winter season.

Unazuki Onsen is a small hot spring town located at the departure point into the gorge. You can view the Shin Yamabiko Bridge at the gorge entrance, utilizing the nearly identical pedestrian bridge beside it.

Then, explore the natural beauty of the gorge in a new way at the Selene Museum of Art. You can learn about the history of the river’s dams and power plants at the Kurobe River Electric Memorial Hall. Complete your day in Unazuki with a dip in the Tochinoyu, a small gender-separated public hot spring bath from which you can view the gorge and passing trains.

At the tiny Kuronagi Station, the first stop along the route, you can view the blue Atobiki Bridge or relax in the Kuronagi Onsen. The onsen is a twenty-minute walk from the station. Outdoor women-only and mixed-gender baths are available, as well as indoor baths.

At Kanetsuri Station, you’ll find food stands and the Riverside Bath, which is completely exposed to sightseers. A unique feature of this station is the Mannen Yuki or “ten thousand year old snow.” This semi-permanent snowbank is piled so deep that it often lasts through much of the summer or even into the following winter. The Mannen Yuki can be seen from an observation deck near the station.

The terminal station of Keyakidaira also offers amazing sights. Take a 15-minute walk down the riverside trail to the Sarutobikyo or “jumping monkey” Gorge, and cross the river near the station using the Okukane Bridge. Below the bridge is the Foot Bath, which seats a dozen people and offers views of the river. End your journey with a stroll on the Hitokui Iwa or “people-eating rock.” This path is carved into the cliff and the rock curves in such a way as to suggest a “huge stone mouth… swallowing up the trail.”