JRailPass.com » Japan Travel Blog » Travel Guides » Typhoons in Japan: What you should know 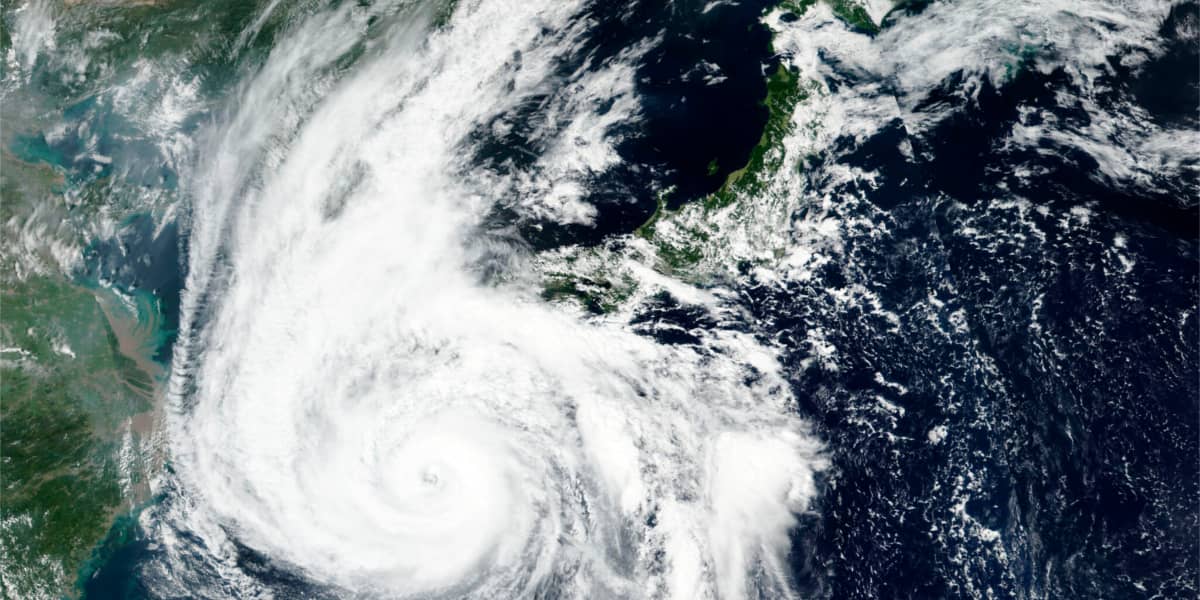 In Japan, typhoons are regular and natural occurrences. These events involve little risk beyond rain and wind causing you to alter your outdoor tourism plans. However, it is useful to know what you should do if you are vacationing in Japan during a typhoon alert.

What is a Typhoon?

Typhoons, called taifu in Japanese, are large low-pressure systems that can develop over the Pacific Ocean. Water vapor rises from the warm surface of the ocean, then condenses to form clouds. The clouds rise into towering columns. As the warm, moist air rises, it cools and begins to sink. The wind begins to circle in the center like water going down a drain. This gives the storm its characteristic spin.

Typhoons may display torrential rainfall and winds of up to 200 km/h (124 mph). Western travelers may be familiar with similar storms that form over the Atlantic Ocean, which are known as hurricanes.

Is it a Typhoon, Hurricane, or Cyclone?

Hurricanes, cyclones, and typhoons are all similar storms that go by different names:

Japan’s typhoon season ranges from May to October each year, peaking in August and September. There is no need to avoid travel during these months, however.

Why not? Each year, about 30 typhoons or tropical storms form over the Pacific ocean. Approximately seven to eight of these may affect the island of Okinawa, and only three reach Japan’s main islands. Your travel plans are unlikely to be affected.

Japan: Built to weather the storm

Japan is susceptible to natural disasters such as earthquakes, tsunamis, and, of course, typhoons. In the past, landslides and flash floods resulting from typhoons damaged structures and claimed lives. Because of this, building codes and other methods have been employed to help the nation withstand whatever mother nature throws at it.

Since 1981, all of Japan’s buildings have complied with rules regarding design and construction. They are built to withstand tremors, winds, typhoons, and heavy snow. Roads and buildings are constructed in such a way that excess water can flow away without damage to the structure. Coastal defenses are in place to deflect potential storm surge.

Local governments prepare instruction manuals and practice regular safety drills in order to prepare for emergencies. English translations of these manuals are available online. Siren systems are also in place to warn of impending occurrences.

September 1 was named National Disaster Prevention Day in remembrance of an earthquake that devasted Tokyo in 1923. Disaster preparedness is taught from a young age; most people in Japan are aware of the necessary precautions and happy to comply. You can also take part in disaster prevention simulations at the Ikebukuro Life Safety Learning Center and the Yokohama Disaster Risk Reduction Learning Center.

What to do if a typhoon strikes

Typhoons move slowly, at around 20 Km/h (12 mph), and their paths can be accurately predicted. If you are prepared, typhoons will have little impact on your Japan vacation.

Travel during typhoon season often includes hot and rainy weather. Pack an umbrella, poncho, and appropriate attire. Make a list of nearby museums or other indoor activities you can pursue if rain interrupts your outdoor plans. In cities such as Tokyo, most businesses remain open and activities continue as usual. You can monitor closures on social media.

If you are in Japan when a typhoon strikes, watch local news media for reports, including travel advisories. Flights, trains, and expressways may be closed during a typhoon, so you should plan your accommodations and activities accordingly. Before booking your late summer travel, check with your airline’s cancellation policy.

Check the Japan Meteorologial Agency website for warnings and advisories.

Make safety your top priority. Don’t try to travel into areas affected by flooding, and don’t enter the ocean. If a typhoon is predicted to make landfall in your area, ask about the location of shelters. When the weather gets bad, stay indoors and close all windows. Use common sense. If you are unsure as to whether you should go out, ask your hosts for their opinion.

Typhoons are more common in the southern islands, and almost nonexistent in the northern island of Hokkaido. If you are concerned about traveling during the peak months, choose northern destinations.

If living in Japan, you may wish to assemble a “typhoon kit.” Your emergency kit should contain bottled water, nonperishable food items, a first aid kit, a flashlight, extra batteries, a change of clothes, and a poncho. These items will help you to be prepared in the event of an evacuation or a few days at home with no electricity.