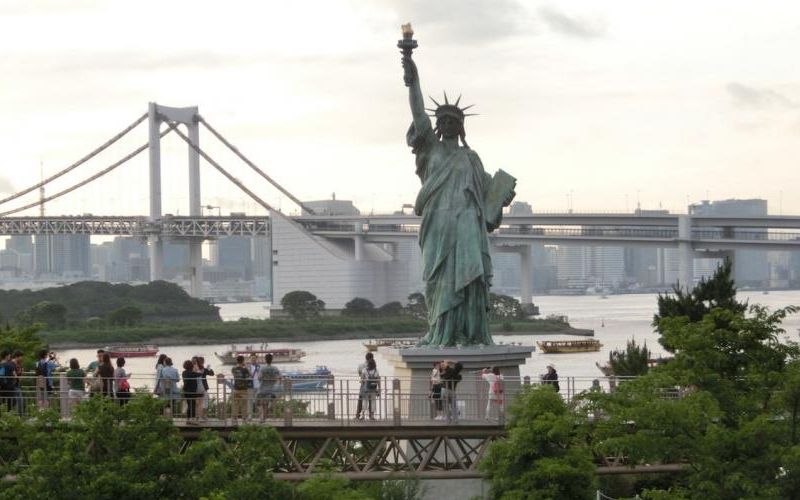 Odaiba is a town or neighborhood located within the bounds of the bustling metropolis of Tokyo, on Japan’s main island of Honshu. Odaiba itself is perched upon a man-made island in Tokyo Bay. It is well known as a shopping and entertainment district. Odaiba is also known as the best place in Tokyo to go on a date.

Odaiba originated with a string of small man-made islands built during the Edo Period, prior to 1868. The islands were used as forts to protect Tokyo against seafaring attacks. In fact, the word daiba from which Odaiba is derived literally means “fort.”

By the 1980s, plans were underway to connect these islands into larger islands, which would become a futuristic business and residential district on the outskirts of Tokyo. An economic downturn during the 1990s, however, left the island nearly vacant.

During the late 1990s, hotels and shopping malls were erected on Odaiba, and the Yurikamome elevated train line made getting there a cinch – and an adventure. In the years since, Odaiba has developed into a popular tourist destination, both for international travelers and locals alike.

How to get to Odaiba

The fastest way from Tokyo to Odaiba is via the Yurikamome elevated train, which crosses the Rainbow Bridge.

From Shimbashi Station on the Yamanote Line, take this unique rubber-tired train to Daiba Station. The trip takes about 15 minutes. The Yurikamome is not covered by the Japan Rail Pass, but day passes are available.

From Shinjuku Station, there is also the option of taking the JR Saikyo Line to Tokyo Teleport Station, which takes around 22 minutes. You will have to pay an extra fee since half the trip is not covered (from Otsuki to Tokyo Teleport).

Alternatively, you may walk the Rainbow Bridge or take the Tokyo Water Bus, a boat that operates each hour between Odaiba Seaside Park and Hinode Pier. The boat ride takes about 20 minutes; traveling the bridge on foot takes 45 minutes.

Pedestrian traffic is encouraged in Odaiba by the division of pedestrian and vehicular traffic. Pedestrians can escape the streets using elevated walkways and other innovations.

Things to do in Odaiba

Anime fans will revel in the Gundam-themed DiverCity Tokyo Plaza. Meet a life-sized Gundam, purchase plastic models at Base Tokyo, or enjoy other shopping and dining experiences.

Expand your knowledge by visiting one or more of Odaiba’s museums. The Museum of Maritime Science is shaped like a cruise ship and offers free admission. Board a real icebreaker ship and view an exhibit on seafaring technology. Or, you can visit Miraikan, the Nation Museum of Emerging Science and Innovation. This bilingual museum features exhibits on robots, technology, space exploration, and the environment. The Panasonic Center and its hands-on math and science museum, Risupia, showcases Panasonic’s latest technologies, including Nintendo games, appliances, cameras, computers, and more.

If you want to get away from it all, spend some time at the Oedo Onsen Monogatari, an Edo Period hot spring theme park and onsen. Stay for the day or overnight to enjoy indoor and outdoor baths, fine dining, massage, games, and entertainment.

Points of Interest in Odaiba

You can’t leave Odaiba without taking time to appreciate its bold architecture. Rainbow Bridge, for example, is an iconic landmark that connects Odaiba to Tokyo via an expressway, a train line, and pedestrian walkways. It is illuminated nightly. From the bridge, you can also glimpse the Odaiba Statue of Liberty, a small-scale model of the famous New York City landmark.

The Fuji TV Building resembles a vast metal framework that suspends an immense metal ball. This headquarters of the national network Fuji Television features exhibits on popular programs, a shop, and an observation deck. The building is open Tuesday through Sunday from 10 am to 6 pm. Admission to the observation deck is ¥550.

The Telecom Center is a large rectangular building with a square hole right in the middle. Its observation deck (with an admission of ¥500) offers views as far as Mount Fuji on clear days.

Odaiba is also rife with plenty of green spaces, allowing you to get away from the hustle and bustle to enjoy the beauty of nature during your excursion from Tokyo.

Palette Town is another large shopping and entertainment complex. Step into eighteenth-century Europe at the Venus Fort shopping mall, or experience cars old and new – and even test drive a few – at Toyota Mega Web. See Odaiba from the top of one of the world’s largest Ferris wheels.

Aquacity Odaiba is another shopping and entertainment option. There, you’ll find many stores and boutiques, restaurants and cafes, in addition to a 13 screen cinema. You can also sample ramen flavors from all over Japan at Aquacity’s resident food theme park.