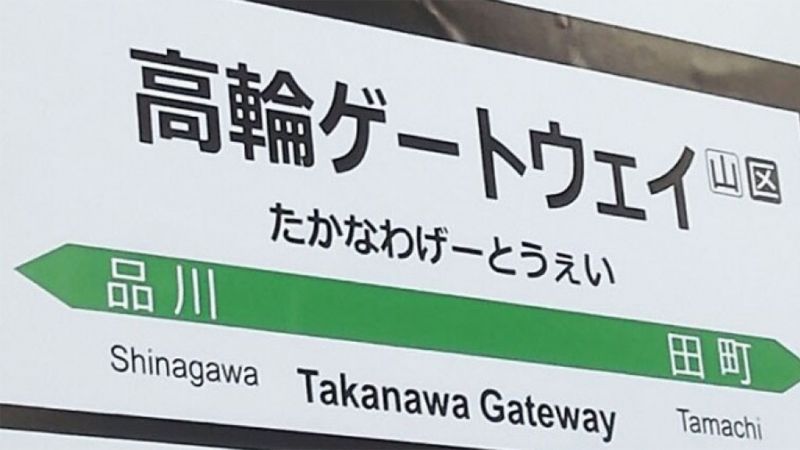 Situated in Tokyo’s Minato Ward between Shinagawa and Tamachi, the newly built station will also serve the Keihin Tohoku Line, and is located close to the popular Roppongi district.

The opening of Takanawa Gateway marks a major step in the ongoing process of developing a large area of the surrounding Shinagawa district into a global transportation and business hub.

Read on to learn more about this futuristic new station, which includes a number of novelty features including an automated convenience store and high-tech security robots.

Takanawa Gateway is the 30th station to open on the Yamanote Line and the 47th station built on the Keihin Tohoku Line. The station is the first to be built by Japan Rail in Tokyo since the Saitama-Shintoshin Station, which opened in 2000.

Both the Yamanote Line and the Keihin Tohoku Line are covered by the JR Pass.

Takanawa Gateway is also located within walking distance of the nearby Sengakuji Station, which allows access to both the Toei Asakusa Line and the Keikyu Line.

It is also easy to access the Tokaido lines, including Tokaido Shinkansen, from Takanawa Gateway, and Haneda Airport is also just a few stops away.

Takanawa Gateway Station is a 3-story facility whose design was inspired by traditional Japanese tastes. Cedarwood from the Tohoku region in northern Japan was used to line the station walls, and the flooring is also wood-grain inspired.

The origami-inspired roof allows plenty of light into the station, and the wide glass windows provide expansive views over the Tokyo city skyline.

The station has 4 tracks, served by 2 island platforms, both are which are equipped with 3 escalators. The platforms are served by an elevator with capacity for 24 passengers, while an 18-person elevator ferries commuters to the concourse on the second floor.

Takanawa Gateway is fully equipped with up-to-date futuristic technology, including:

On June 3th 2014, JR East announced that a new station would be built above the existing Tamachi Depot, with the aim of having the construction completed in time for the 2020 Tokyo Olympics and Paralympics. 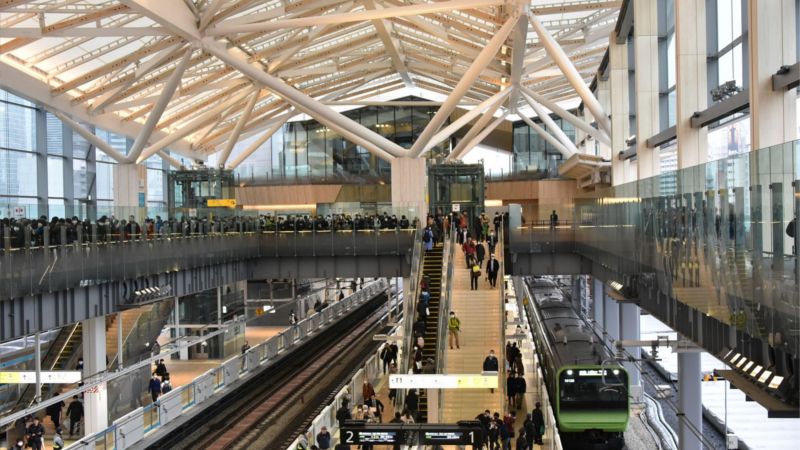 Kengo Kuma, the architect behind the National Stadium that will be the main venue for the Olympics, was hired to design the new station.

The choice of name, Takanawa Gateway, was the result of a naming competition in which JR East ran for the new station. Over 13,00 names were suggested by the Japanese public before “Takanawa Gateway” was chosen. The official name of the station was announced on December 4th, 2018.

JR east opened Takanawa Gateway station for service on March 14th, 2020. The planned opening ceremony was unfortunately postponed due to concerns surrounding the COVID-19 coronavirus pandemic, as was a public inauguration scheduled for March 19th.

Nevertheless, more than 300 railway fans showed up at the station before 4am on March 14th to greet the arrival of the first train on the Yamanote inner loop line 30 minutes later, enthusiastically cheering and snapping photographs from the platform.

The area around Takanawa Gateway Station was previously used as a railcar base and currently lacks many of the amenities found in other areas of Tokyo.

However, the opening of the new station is the first step of a wider plan to create a new town in Tokyo over 13 hectares of land, in order to attract global business,

Known as Global Gateway Shinagawa, this “land readjustment project” aims to enhance transportation and spearhead new construction in the neighborhood, including a number of office buildings, residential housing, and hotels. This phase is expected to be completed by 2024.

After that, the next major step will be the planned opening of the Linear Chuo Shinkansen in 2027, which will allow passengers to travel between Tokyo and Nagoya in around 40 minutes.