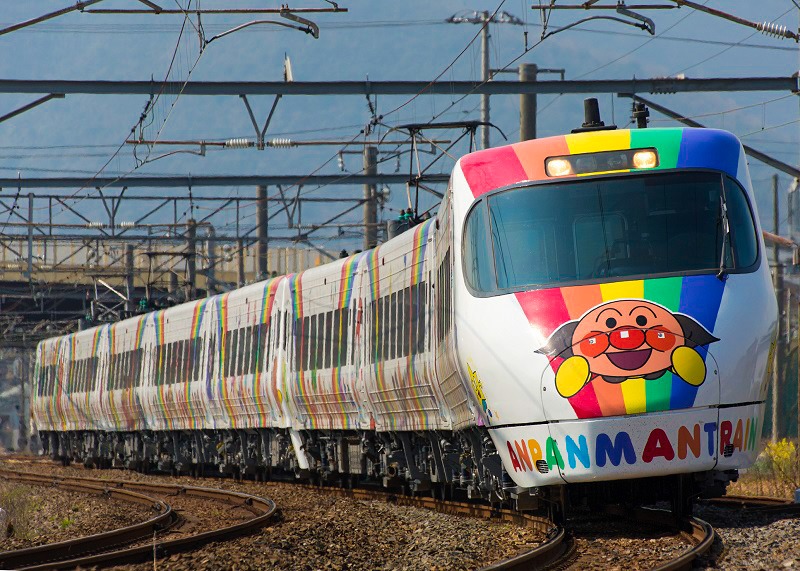 Riding trains in Japan is no longer just about getting from place to place. A ride on Japan Rail’s Joyful Trains – with fun and exciting themed rail cars – is a destination in itself.

Joyful trains appeal to a wide range of interests. Several restored historic trains transport passengers not only from place to place, but seemingly on a journey through time as well.

The FruiTea Fukushima Train could be likened to a “traveling café,” featuring fine foods and beverages crafted from local produce.

Other trains allow passengers to bask in opulence and luxury during their travels, some even offering relaxing spa foot baths.

Art lovers can travel on “the world’s fastest art gallery”, the Genbi shinkansen, which features modern paintings, artwork, and installations created by artists specially for each car.

The exterior of the train is laminated with photographs by Mika Ninagawa, and the inside is nothing short of spectacular.  This moving museum goes from Niigata to Echigo Yuzawa in under an hour.

This train was designed around rustic Japan, taking people to an experience similar to home villages, “where the true heart of the Japanese people resides.”

Going from Nagano to Tokamachi station, along the Iiyama Line, travelers can see the sights of the Chikuma-gawa River (Shinano-gawa River), and its village woods, rice fields, and country houses.

Some of the most popular Joyful Trains, however, are those featuring characters from video games, anime series, and manga. Who are your favorite anime and manga characters? Likely, Japan has a Joyful Train just for you.

Pokémon With You train

Since the release of the first Pokémon video game in Japan in 1996, and the anime series the following year, the Pokémon franchise has become popular with both children and adults the world over.

The Pokémon With You train has run since 2012 in the Tohoku region on the Ofunato Line. It was designed “to bring smiles to Tohoku children” since this was the region devastated by the earthquake and tsunami of 2011. Its two train cars are decorated inside and out with images of more than 100 pokémon, including favorites such as Pikachu and Charmander.

Note: Since July 2017 the Pokemon Train is again operating with a revamped new design. Routes will go from Ichinoseki to Kesennuma and back.

Inside the Communication Seat Car, each seat back features images of 1 to 2 pokémon, and no two seats are the same. Pokéballs are featured on the center aisle carpeting, and the curtains and other décor are also themed. The Playroom Car is decorated as a Pokémon-filled forest.

Activities for children on this car include a play tunnel, plush Sleepytime Snorlax pillow, picture block puzzles, and a bin full of pokéballs.  Get your tickets for the Pokémon train and get ready to begin your own Pokémon adventure!

The Evangelion Shinkansen‘s first carriage served as an exhibition of Evangelion memorabilia, such as art frames and a life-sized cockpit.  Unfortunately, this train stopped running on March 2017, but has been replaced with the next entry! 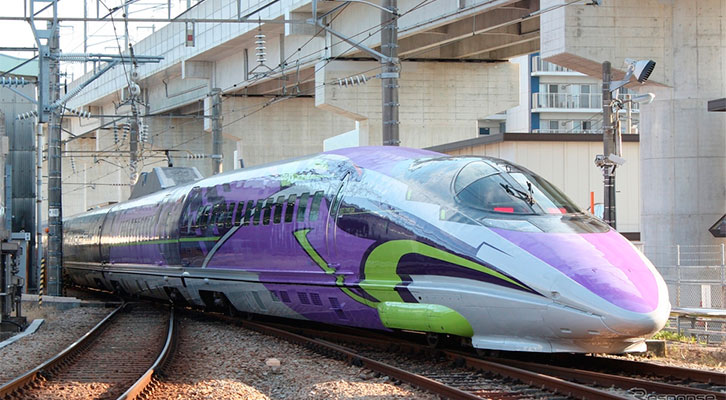 JR West debuted a Hello Kitty bullet train service on the Sanyo Shinkansen line, June 30th, 2018. For now, it’s not known how long it will run, but it has so far proved to be incredibly popular!

This train is decorated with Hello Kitty’s iconic red ribbon, as a way to represent the strengthening of the ties between the Shinkansen services and the western part of the country. The best part? It’s included in yourJR Pass!

Doraemon is a cartoon character that has been popular in Japan since the 1970s. Doraemon is a time-traveling, cat-shaped robot. The Doraemon street car train runs in Takaoka City,(Toyama prefecture), the birthplace of Hiroshi Fujimoto, the artist who created the character. Doraemon was named as Japan’s “anime ambassador” in 2008 by Japan’s Foreign Ministry.

Sonic the Hedgehog is known for its fast rolling speed, and a blue bullet train was running in Tokyo for a limited time to celebrate the 25th anniversary of the Sega video game franchise. The Sonic train is complete with images of Sonic, Knuckles, and other characters.

Some anime and manga characters are a historic part of Japanese culture. This is true of Moomin, the Scandanavian cartoon that has been beloved in Japan for more than half a century. The primary Moomin train runs on the Isumi Railway in the Chiba Prefecture.

A vintage 1936 train was chosen for this project because the front car was said to be shaped like Moomin’s face. Don’t be surprised if you find other trains decked out with Moomin throughout the country. 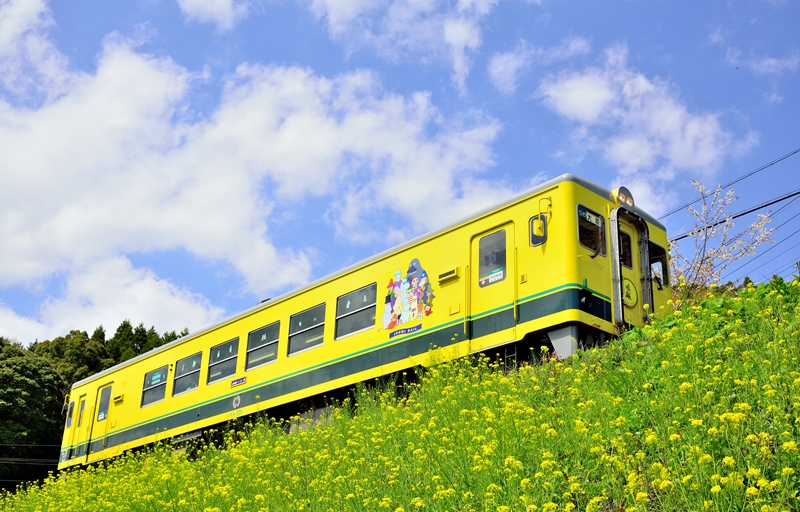 The Anpanman manga and anime have been produced in Japan since 1973, and this well known character has its own train as well. Anpanman is a super hero with an anpan, or bean filled pastry, for a face.

The Anpanman Train crosses between Shikoku Island and the Japanese mainland. This journey across the Seto-Ohashi Bridge is considered one of the most beautiful scenic train rides in Japan.

Gegege no Kitaro is a manga created in 1960, and fans often visit Tottori, the birthplace of its author, Shigeru Mizuki. Now, fans can make this pilgrimage aboard the Gegege no Kitaru Train, bedecked with images from the manga.

Whichever character themed train you choose while visiting Japan, you are certain to be delighted. These trains aren’t just for children – they are an efficient means of transportation and wonderfully nostalgic for the young at heart. To find out more about train travel in Japan – from what to eat to how to buy your tickets – please visit our informative Japanese trains and transportation articles.

7 thoughts on “The 10 best Japan joyful and character trains”