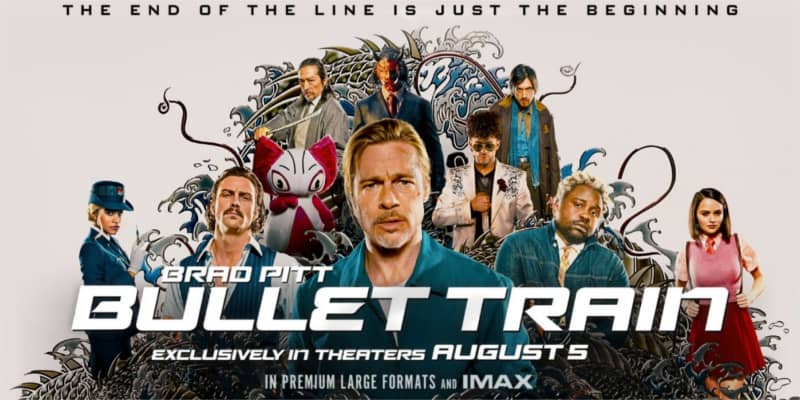 Japan’s famous Shinkansen rail network got its biggest exposure yet following the release of the Hollywood blockbuster, Bullet Train.

This explosive action movie set almost entirely on the tituar mode of transport was released on August 5th, 2022. But it and generated a huge amount of buzz from both Japanese and international film fans alike.

This is not only because it features an incredibly stylish depiction of Japan and Shinkansen travel, but because it stars the beloved Burapi (the nickname for Brad Pitt in Japanese). Pitt is a huge star in Japan and each of his movies are eagerly anticipated in the country.

The fact that the film is packed with other popular actors and is directed by the talented action specialist David Leitch (John Wick, Atomic Blonde) has only added to the appreciation.

To celebrate the success of Bullet Train, we’ve compiled everything you need to know about this exciting film. Read on for a breakdown of the plot, its accuracy, and the differences between the fictional Shinkansen in the film and the real thing!

What Bullet Train is based on and plot details

Bullet Train is based on the novel Maria Beetle by Japanese author Kotaro Isaka. Published in 2010, the novel is the satirical story of 5 highly trained assassins who have been assigned the same target on a bullet train traveling from Tokyo to Morioka in Iwate Prefecture.

The plot was tweaked slightly for the silver screen, as the assassins are now traveling on a Shinkansen from Tokyo to Shin-Osaka. Additionally, one of the assassins, Prince (a character played by Joey King), was changed from male to female for the film.

King was particularly happy with this change, saying: “I loved my character, everything [about] how she was written, how villainous she was, but then also that her name is so strong and powerful”.

Another big change is that the film is much more comedic than the mostly serious thriller novel. However, despite some other minor changes, many of the other plot elements from the book remain.

In the film, Brad Pitt plays Ladybug, a hitman with bad luck: he always causes death even when he doesn’t mean to. He wants to retire, but is pulled back into the game for one last job by his handler Maria Beetle.

His mission is to retrieve a briefcase from the bullet train of the film’s title. But this simple task becomes complicated when he realizes there are several other assassins on board who want the case, leading to bloody mayhem in a fight to the death.

Who’s in the cast?

The film-makers of Bullet Train did not simply rest on the star power of Burapi to draw in audiences: they also assembled an impressive supporting cast.

Perhaps the most notable is Sandra Bullock as the mysterious Maria Beetle. Although the role was originally meant for Lady Gaga, she had to drop out following scheduling conflicts. This led to Bullock signing on to reunite with Pitt after their winning collaboration in The Lost City.

To play the other deadly assassins on board the train, Leitch made some intriguing choices, including

Taylor-Johnson and Henry, who play unlikely brothers Lemon and Tangerine, apparently bonded particularly well on set. The former bought a lemon tree to symbolize their relationship that they kept alive during filming, which is now in the possession of the film’s director.

Additionally, fans of rapper Bad Bunny were pleased to see him continue his foray into acting after a small role in F9: The Fast Saga. In Bullet Train, he plays Wolf, a formidable Mexican assassin with a personal vendetta against Ladybug.

Check out the film’s poster for a look at how some of the characters appear in the film:

If you still haven’t seen Bullet Train, the fun trailers for the film will definitely convince you to get on board for the ride. On release, they were heavily praised for Pitt’s comedic timing, flashy visuals, brutal action, and the cool soundtrack (which features a Japanese version of the Bee Gees’ Stayin’ Alive).

Check out the full trailer below!

When it was released in August 2022, Bullet Train received mixed reviews from critics and it only has a 54% critic fresh rating on Rotten Tomatoes. However, fan reaction was much more positive, as the audience score was 76% percent.

Bullet Train also attracted some controversy as some accused the film of whitewashing characters found in the book, including David Inoue, Executive Director of the Japanese American Citizens League.

However, the original novel author Isaka did not share that opinion. He said that the characters in Maria Beetle are “not real people, and maybe they’re not even Japanese,” and that he always dreamed it would be made into a Hollywood blockbuster.

“I don’t have any feeling of wanting people to understand Japanese literature or culture,” Isaka added. “It’s not like I understand that much about Japan, either.”

If you’ve seen Bullet Train, you’ll likely recognize the shot of the Shinkansen speeding through the Japanese countryside and the iconic Mt Fuji.

But it might surprise you to know that, aside from some exterior shots of Tokyo, much of the filming locations for the movie were actually in California.

The train used for the movie, the “Nippon Speed line” is fictional, although it bears some similarities to the real Shinkansen on the line between Tokyo and Kyoto.

The interiors for the train are completely artificial and were constructed in the Sony Pictures Studios in the USA, with large LED screens outside the windows projecting the countryside of Japan.

There are also some small tell-tale details in Bullet Train that differ from real life:

Additionally, the real-life Shinkansen between Tokyo and Kyoto only takes 140 minutes maximum while in the film it is depicted as a 12-hour, overnight trip. As the running time of the Bullet Train movie is 2h 6m, you would have time to watch it on the real journey!

Despite these differences, audiences still turned out in droves to see this “wild, non-stop thrill ride through modern-day Japan”. So far, Bullet Train has grossed over $230 million worldwide, making it a crowd-pleasing hit that is sure to inspire fans to travel around Japan on the real Shinkansen for years to come.