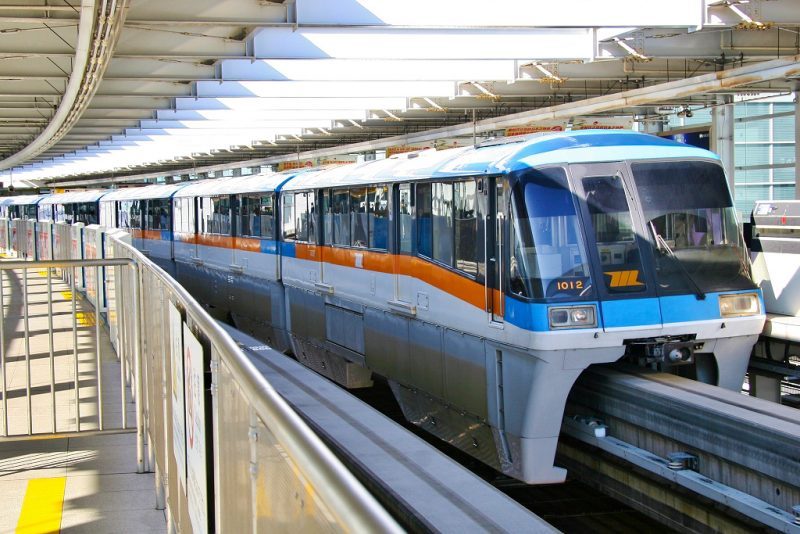 The Tokyo Monorail Haneda Airport Line, often called simply the Tokyo Monorail, began operation in 1964. It was the first commercial monorail system in the world. The elevated straddle-beam monorail line parallels the coast of Tokyo Bay. Travelers can enjoy seaside views, and on clear days, Mount Fuji is visible in the distance.

Haneda Airport is ideal for travelers wishing to reach Tokyo, as it is much closer to the city center than Tokyo’s Narita Airport. It is also the busiest airport in Japan. The Tokyo Monorail is there to ease this inherent congestion and make travel to and from the airport an excursion in itself.

How can the Tokyo Monorail benefit you on your travels? How can you use it to efficiently travel to and from Haneda Airport? This handy travel guide is here to help.

Using the Japan Rail Pass on the Tokyo Monorail

Although the Tokyo Monorail is a private railway, it has been integrated for use of the Japan Rail Pass. To board, simply show your activated JR Pass at the gates. Remember that you can activate your pass at the airport (Haneda JR East Travel Center), near the Tokyo Monorail gate.

Suica, Pasmo, and ICOCA cards are also accepted by the Tokyo Monorail. These cards are activated with a ¥500 deposit and then loaded with prepaid funds. Then, when you wish to use the monorail, you simply touch the card to the ticket gate. The fare is then automatically deducted from the card. The deposit will also be returned when the card is turned in at the close of your trip.

Should you decided to activate your JR Pass later on, please be aware that you should pay for the ticket with prices depending on your departure and arrival stations. Fares from Haneda Airport Terminals to Hamamatsucho Station are 490 ¥ (adult) / 250 ¥ (Child).

The Monorail departs, on average, every four minutes during operating hours. During peak times, trains depart every 3 minutes. Hamamatsucho Station (first station on the Yamanote Line) is reached in as little as 13 minutes. This rail service begins operation around 5 am daily, with the last departure at around 11:30 pm.

Three different types of train service operate on the Tokyo Monorail Line. The Haneda Express is a direct, nonstop service between Haneda Airport and the Monorail Hamamatsucho Station. Rapid and local trains are also available (check the next station for more information).

The Haneda Express trains offer a direct service between the 3 terminals in Haneda Airport and the Monorail Hamamatsucho Station, whereas local train services stop at all of the following stations:

Monorail Hamamatsucho Station allows passengers headed to the airport to check in with their airline service. This station facilitates transfer to the JR Yamanote and Keihin-Tohoku lines. All stations on the Yamanote Line can be reached in less than thirty minutes from Hamamatsucho. The Yamanote Line connects to many of Tokyo’s attractions.

The Tennozu Isle Station is connected to the Tokyo Waterfront Area Rapid Transit Station by an elevated walkway. Rapid services stop at this station, but the Haneda Express does not.

Oi Keibajo-Mae offers access to the Ohi Racecourse, after which it is named. Rapid trains stop here, but the Haneda Express does not.

The names of the Sebijo and Shin-Seibijo Stations mean “maintenance facility,” and these stations do indeed provide access to Haneda Airport’s maintenance areas. They serve as stops for the local train.

The Ryutsu Center Station is located near warehouses, rail freight terminals, and similar facilities. Its name means “logistics center.” Rapid trains use this station, but the Haneda Express does not.

Showajima Station is accessed only by the local trains. A passing loop is located nearby, which allows rapid trains to speed on past their slower counterparts.

Tenkubashi Station is a stop for both the Monorail local trains and the Keikyu Airport Line.

So, are you ready to book your next flight to Tokyo? If using Haneda Airport, you are now equipped to use the Tokyo Monorail with confidence as you embark on your next adventure!

3 thoughts on “The Tokyo Monorail: Haneda Airport to Tokyo”