The smallest of Japan’s four main islands, Shikoku is a unique region of the country rich in culture and natural beauty.

Known for its beautiful coastlines on the Pacific Ocean and Seto Inland Sea, its delicious sanuki udon noodles, and the Shikoku Pilgrimage to 88 Buddhist temples around the island, Shikoku has something for every visitor.

Historically, Shikoku was relatively isolated from the rest of Japan and has kept much of the nation’s oldest cultural characteristics as a result, including the architecture of its many temples. This makes it the perfect destination if you want to see the authentic, traditional side of the country.

It is now connected to Japan’s railway network and can be easily visited if you have a JR Pass. Check out the guide to the region below to learn more about Shikoku.

Shikoku may be a relatively small island, but it constitutes 4 of Japan’s prefectures:

Shikoku spans an area of around 18,800 square kilometers (7,259 sq mi). Much of the island is rural, with a focus on agriculture and fishing. Between its small towns and villages and its many temples, it is a great place to experience the traditional character of Japan.

The most populous cities in Shikoku are the capitals of its 4 prefectures. Each of these locations has plenty to see and do, with their own unique landmarks and features: 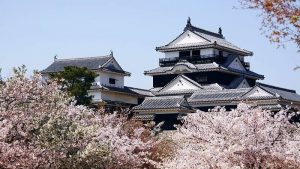 Capital of the Ehime prefecture and the largest city on Shikoku Island, Matsuyama has lots to offer tourists in Japan.

In addition to its famous castle and hot springs, Matsuyama is home to important museums including The Museum of Art, Ehime and The Shiki Memorial Museum.

END_OF_DOCUMENT_TOKEN_TO_BE_REPLACED 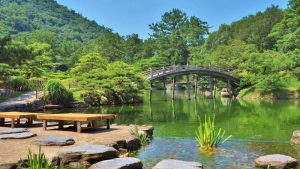 Takamatsu is one of the core Japanese cities, located in the Kagawa prefecture in the Shikoku region. Situated on the shores of the Seto inland sea, it is an important port city and one of the main entry points to Shikoku Island from the main island of Honshu.

END_OF_DOCUMENT_TOKEN_TO_BE_REPLACED

Best things to do in Shikoku

Shikoku has a wealth of things to see and do. From exploring stunning rock formations and rugged coastline to white-water rafting on the Yoshino River, this region is perfect for outdoor activities.

It is also a great place if you love Japanese architecture. Kōchi Castle is widely considered to be the most intact castle in the country, while it is never hard to find a Buddhist temple — there are 88 on the famous Shikoku Pilgrimage trail.

Some of the best things to do on Shikoku include the following:

Various train lines operate in and to Shikoku. Although the island is not served by any Shinkansen (bullet trains), it is possible to travel on the Sanyo Shinkansen to Okayama Station and change to the Seto-Ōhashi Line. This crosses the Seto Inland Sea via the Great Seto Bridge to reach Shikoku, connecting the region to the rest of Japan’s railway network.

In this way, it is possible to reach Shikoku using a JR Pass.

The trains on Shikoku itself are run by Shikoku Railway Company (JR Shikoku), while the Seto-Ōhashi Line is operated by both JR Shikoku and JR West.

The train lines that serve the Shikoku region are as follows:

Japan is made up of 8 official regions, although Okinawa Prefectures is often regarded as a 9th region of the country.

Aside from Shikoku, the other regions of Japan are: