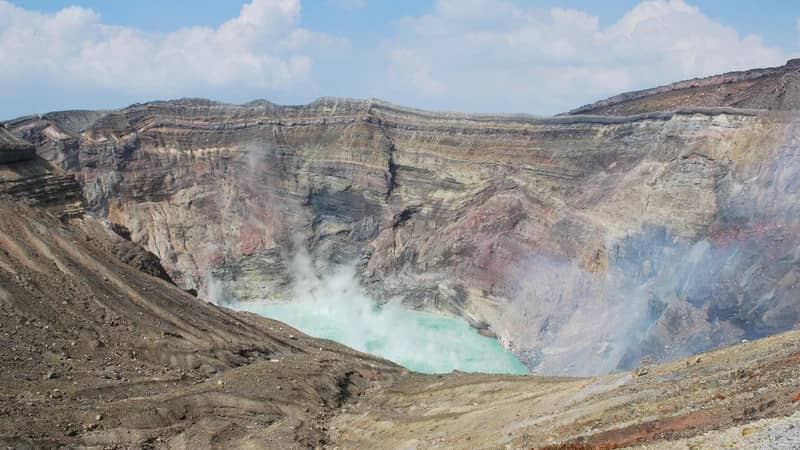 Mount Aso is located in Aso City, in the Kumamoto Prefecture of Kyushu Island. A constant stream of smoke is emitted from the caldera, a reminder that the volcano is active.

The landscape is very diverse. Inside the caldera, there’s everything from grassy plains with grazing horses and cattle, to the rocky Nakadake peak.

If you’re feeling adventurous, read on to find out how to get to Mount Aso, what to see and do, and other visitor information.

How to get to Mount Aso

To get to Mount Aso, you’ll first need to make your way to Aso Station. Local trains and limited express trains (both covered by your Japan Rail Pass) connect Aso and Kumamoto stations.

From JR Aso Station, you can take the bus to Asosan Nishi Station, the journey takes around 30 to 40 minutes. Note that this bus ticket is not included in the JR Pass.

There is a shuttle bus to Nakadake Crater, you can also walk to it in around 30 minutes.

A convenient way to get around the Aso area is by renting a car. There are car rental companies in Kumamoto City.

What to see when visiting Mount Aso

Mount Aso can be enjoyed from a distance. Views of the volcano are breathtaking from the surrounding areas. If you want to get a closer look, these are the most interesting sights inside the caldera.

Nakadake volcano is one of the active volcanic peaks in the center of the caldera. Inside the crater, there is hot spring water rich in minerals

You can usually visit the crater of Mount Nakadake, but the crater area may be closed off during bad weather, episodes of volcanic gases, or the risk of volcanic activity. Be sure to check it’s open before you head there.

Another attraction is Komezuka, a volcanic cone around 50 meters high. It’s a cute, symmetrical cone covered in and surrounded by grassy fields. You can enjoy walking trails around Komezuka.

Aso Shrine dating back over 2000 years

Aso Shrine shouldn’t be missed when visiting Mt. Aso. The shrine is historically significant, believed to date back to the end of the Yayoi period (300 BC to 300 AD).

An earthquake in 2016 caused the Aso shrine’s most noteworthy feature, the Roman Gate, to collapse. Reconstruction works are planned. 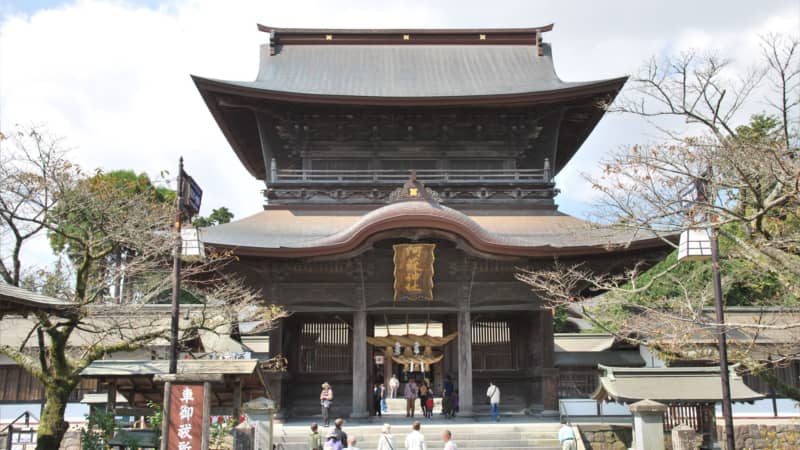 To find out more about the site, tourists can visit the Aso Volcano Museum and Visitor Center. The building is set on a grassy plain within the Aso caldera, around 2.5 miles from Nakadake crater.

In the same building as the visitor center is Mount Aso Museum. The museum offers a more detailed look at Mount Aso. The museum includes multimedia exhibits and interactive activities. There is also a shop and a café.

Mount Aso Museum and Visitor Center are open year-round from 9 am to 5 pm. It may be closed during bad weather, so it’s worth checking in advance.

The visitor center is free, however, there is a small fee to enter Mount Aso Museum. Fees are subject to change.

The mineral-rich hot springs source several onsens in the area which are enjoyed by locals and visitors.

Some of the most popular onsens in the Aso Area include:

You can combine exploring the caldera with a relaxing visit to an onsen. The hot springs offer visitors a chance to relax and enjoy the health benefits of the spring water.

Here are some of the most interesting facts about Mount Aso:

Mount Aso is an impressive natural wonder in Japan. You should definitely consider adding it to your Japanese travel itinerary.

When was the last time Mount Aso erupted?

Mount Aso last erupted at 11:43 am local time on Wednesday, October 20, 2021. Following the eruption, Japan Meteorological Agency (JMA) issued a level 3 volcanic activity alert. There were no reports of casualties or major damage to the area.